A Site Plan Application has been submitted to the City to build two new restaurants at the Main West Mall, on the site of a former restaurant that was destroyed in a fire in November 2013. 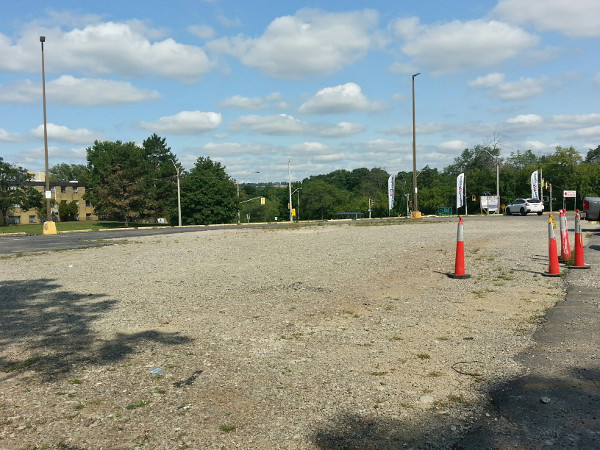 But nothing is ever easy in Hamilton, and the application has run into an obstacle that RTH readers will find gruelingly familiar: a standing provision in the City's Official Plan to widen Main Street to six lanes.

Thankfully, Ward 1 Councillor Aidan Johnson has submitted a notice of motion for the September 1, 2015 Planning Committee meeting to waive the requirement of a road widening. 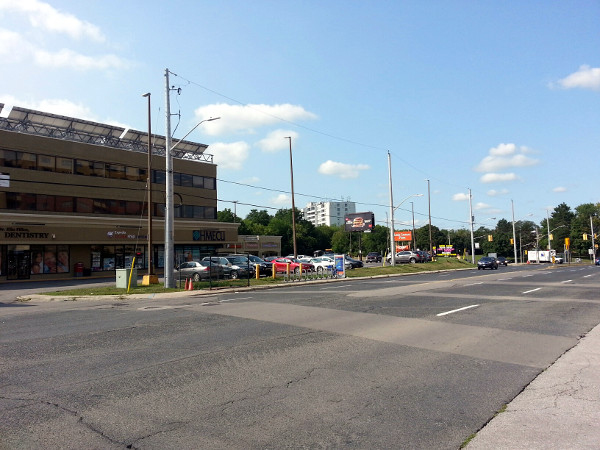 Main Street West is already five lanes wide and is lined with buildings that would have to be demolished in order to widen it further, but that hasn't stopped the Public Works Department from objecting to every new development project that would match the existing build-to line.

The same issue came up earlier this summer with the Site Plan Application for 21 Main Street West, at which the property owner is planning a new four-storey building. 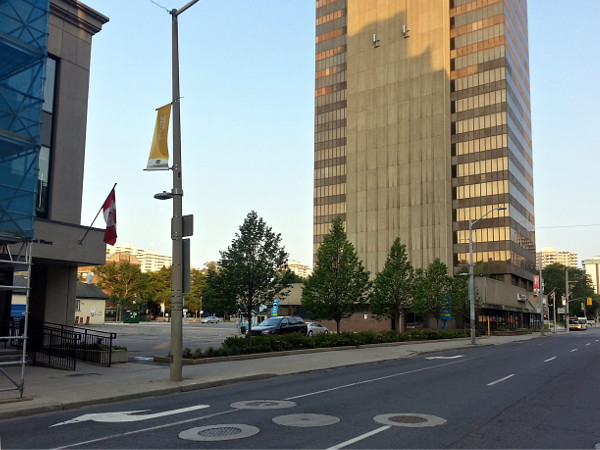 It was also one of the obstacles that scuppered the proposed Hamilton Grand development at the corner of Main Street East and John Street South, after the developer was told by Engineering that he had to move the front of the building back 2.4 metres to make room for an extra lane.

A Spectator column by Andrew Dreschel from 2010 quotes Gary Moore, the City's Director of Engineering Services, explaining why you keep feeling the need to drop your face into your open palms:

The rule is you take the widening; that's the starting point. Whether we need it or not, normally we don't get into that because you don't want to limit yourself or future generations.

According to Jason Thorne, the City's General Manager of Planning and Economic Development, "We are reviewing this policy in the Official Plan in consultation with Public Works and intend to have a proposed amendment in front of Council before the end of the year."

I would urge Council in the strongest terms to approve this recommendation when it comes forward. The absolute last thing we should ever do with Main Street is widen it further than the five lawn-gobbling lanes it already is.

What Main Street really needs is to have some space carved away from the juggernaut of automobile lanes and repurposed to make the street safer and more welcoming for people walking and cycling, not just people in cars racing across the city.

Main Street should be the City's thriving commercial centre, but no urban business district can thrive when it rests on the side of a five-lane highway. The absolute minimum we should do is agree that our five-lane highway does not need to become a six-lane highway! 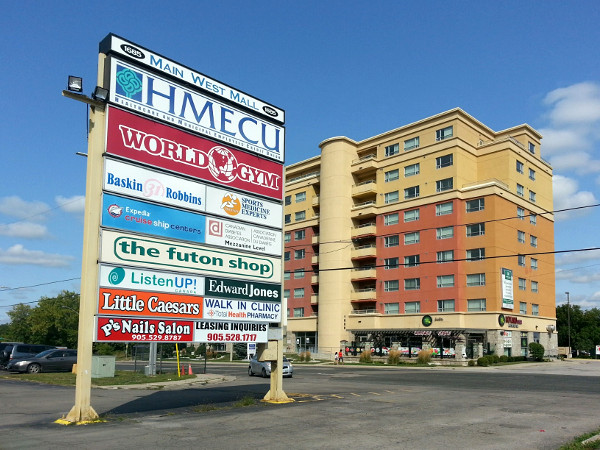 Main West Mall sign with student apartment across the street

Finally, some sensibility about Main Street.

A related topic -- make it easier for businesses to open up (whether a small mom-and-pop, or a large highrise development).

I hear many stories of businesses trying to open but failing to do so. There was a meatball shoppe ("The Meatball Company", 971-ish King Street) that was trying to open near our place on King Street (near Central Cycle) but has apparently failed to open. Now I see the meatball counter installations inside starting to be ripped out (I guess the landlord is clearing it?). That must be a heartbreak to whomever tried to open The Meatball Company.

And stories like Gorilla Cheese and others, I keep hearing about (stymied from operating at all, rather than being allowed to operate at reduced capacity until required modifications -- moving into a previous restaurant place then city finding out that the vent was too small, I think -- I suspect one could be allowed to use electric grills instead of gas grill, or cook only a smaller grill, dealing with the reduced-diameter vent, or something). City needs to be more aggressive finding safe exceptionss that allows a business to open partially. Fortunately, they are surviving and will open soon on Ottawa Street.

Not being able to open at all, means a business consumes rent for almost a year while they struggle to break the red tape to open, and then failing before they open. Certainly there can be problem businesses but I have heard enough anecdotes that there's still too much red tape. What further steps are being done to assist businesses in opening?

Update -- based on some inquiries in the Sherman Hub facebook group, "The Meatball Company" was not bogged by red tape; my apologies. Just wanted to amend the above post. On related topic, building owner apparently changed hands this year, but would not be related to this. Some information would be useful to track down, however.

never ends in this town. Have stumbled across many potential stories recently which seem to show the same old, same old still running the show.

lack of cycling accommodation is happening anywhere a road construction, or re-painting project has taken place this summer. Not a single thought to cyclists. City staff wanting wider traffic lanes downtown now, despite everyone and their brother understanding that wider lanes = speeding and more carnage.

Our LRT project is either going to be the worst one ever built, or heads will explode at city hall if Metrolinx dares to impose proper, safe, vibrant streets on this city.

Jason Thorne working on the corridor for the LRT. He's a key guy behind some of the Hamilton revitalizations including James St North.

yup, he's a fantastic addition to city hall. Sadly, we need about 30 more.

Well, let's get started! Let's work towards that with the upcoming LRT office (add a few Jason Thornes) as well as a few aspiring graduates, a couple new staff, then it all adds up.

Nice to see councilor Johnson introducing the idea of common sense to this issue.

Meanwhile, in places that understand that cities are for people, not cars...

Here's an example of what was an excessively wide Hamilton-style street. Until 350 homes were built on what was road space. With pedestrian and cycle infrastructure also being installed. See:

I learn something new everyday. They turned a disused road tunnel/underpass into a playground: 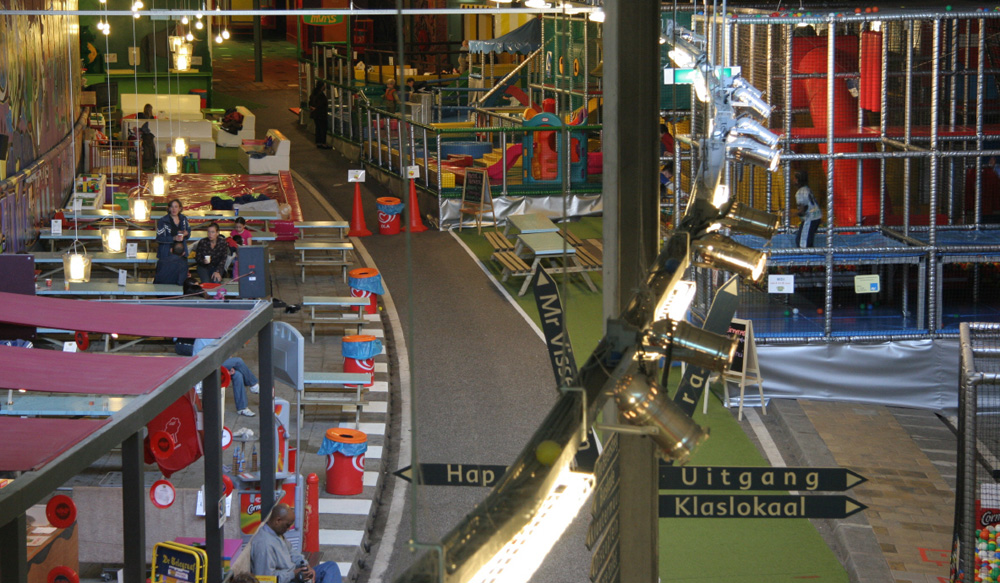