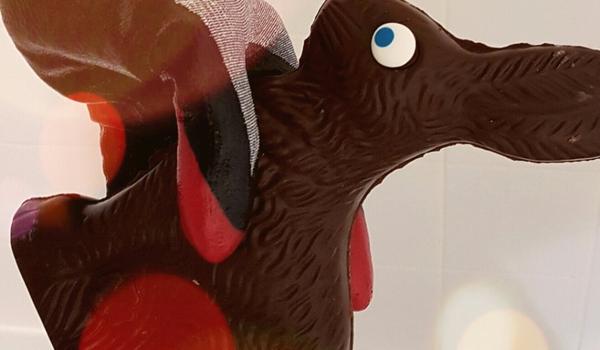 Admittedly, I expected to hate this play. Now Magazine gave this show one N out of five when it was at the Toronto Fringe last year, and Tommy Jeff McAteer's previous play "Headless/The Play" was called a "mess" by My Entertainment World and given an "F".

I wasn't just worried about the quality of the play, but also its content. The play is billed as allowing the audience to "share in the inner thoughts of serial sexual predator". Additionally, McAteer did not attach his name to the show at Hamilton Fringe. Nor is anyone else attached to the show, other than the nameless Marbles Theatre. I braced myself for what I thought would be a misogynistic rant.

I planned to write about the question of whether this show was so "bad" that it shouldn't be at the Fringe. (And the answer is yes, McAteer deserves to be there, like any other theatre artists who puts their sweat and money on the line to make theatre). However, that's not what this review is about.

Why? Because the misogynistic rant I was expecting didn't come. In fact, from the beginning McAteer acknowledges the nature of his show and its ability to re-victimize people, and he goes out of his way not to exploit the victims. Additionally, through the show and the program, McAteer addresses a number of academic resources about sexual assault.

McAteer has something to say, but here's the problem: the show is so convoluted it's hard to determine exactly what that is. Added to that, there are times when McAteer seems to be on a journey and the audience is not following him.

Case in point, McAteer brings three knifes on stage with different neon coloured handles. He takes turns yielding each of them and waving them at the audience in a very excited way. I was much too concerned with my personal safety from a potentially flying knife to pay attention to what McAteer was saying. By the end of the show, it was never explained why there were three knifes on stage, as opposed to the more obvious choice of just one.

There are many more examples of this, but needless to say, McAteer would benefit from the help of a quality dramaturg and director, if he continues to create theatre. With the number of academic references in his program, I was left to wonder if McAteer was looking for an intellectual conversation about the topic of sexual predators rather than putting on a theatre show. Theatre, at its heart, is supposed to make you feel and McAteer appears to be well aware of the injustice of making his audience feel like it's the victim of a sexual predator.

Fringe isn't always about ticket sales and awards. It's supposed to be a sandbox to allow theatre creators to grow, and to this end, the measure of success may be what an artists has learned over the course of the Fringe. Although THE EASTER BUNNY is confusing, and has a large number of technical flaws, there's a lot to think about and learn from this piece from everyone involved.