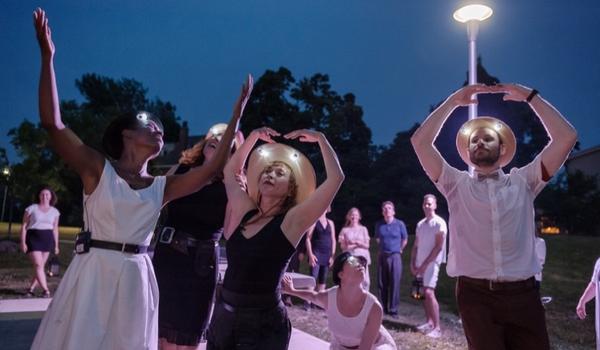 One of the more interesting productions in the 2019 Hamilton Fringe, was this multimedia, multi-language, participatory, site specific production called "Babel-o-drome", which had a short three-performance run the final weekend of the festival.

It was an immersive "happening" that surrounded us with dialogues, shared in both official languagesand a multiplicity of multimedia images that echoed and reinforced those same texts.

Performed on the grounds of the historic, 19th century Hamilton Museum of Steam and Technology on Woodward Avenue, this production was a very different experience than the standard fare on offer at the Fringe. I have lived in Hamilton for the past forty-five years and have driven past this museum many times, but this theatre production was the first opportunity I have ever had to visit this site.

Beginning with a scene at a location with the audience seated at picnic benches, a cast of ten actors and musicians, plus the sixteen member Element Choir, conducted by Christine Duncan, surround the audience while riffing on and exploring the ideas around communication in the age of the internet.

"Hashtag Cute Guys," someone says. "Hashtag live theatre", says another performer. Using cellphones, the performance is live-streamed to the internet. Portable projectors, images and video are projected onto picture frames filled with opaque glass that are carried by members of the choir, and are also projected onto the white clothing of performers. Technicians walk around carrying portable multi-coloured LED lights, focusing and refocusing them on the performances.

So what we get is a mashup of the old and the new. Theatre, an ancient form of communication, where an audience encounters something live and immediate, gets mixed into the technological innovation that allows that experience to be shared with people watching anywhere in the world.

Over the span of an hour, we are taken around the museum site to five different locations. At one, the choir improvises a song with rhythmic vocalizations that are echoed back and forth between the performers and the audience.

In another scene set in an airport, the cast approach a microphone one by one and declare who they are, what language they speak, and where they are from. All the while, a musician with double bass improvises jazz progressions and spoken-word poetry is spoken by the cast, who are wearing microphones plugged into portable amplifiers around their necks.

Another scene focuses on Morse Code as an example of an older communications technology.

Director and mise-en-scène Dominique Banoun, with her many collaborators, has created a production that is unique, culturally diverse and rare. There is a French theatre term called a "tableaux". To my mind, this normally means a frozen moment in time. However, in this case, the images created by the company are continually surrounded by movement and sound.

Sadly, this production, which has been performed before at venues such as the Guelph Jazz Festival or Toronto's Culture Days Festival, flew under the radar during the final weekend of the Fringe. It certainly did not get the attention that it deserved.

They say that hindsight is 20/20, but perhaps a location nearer to the rest of the festival, closer to the core of the city, such as the playing field at Sir John A MacDonald Secondary, the cemetery on York or on the grounds of Dundurn Castle, might have helped this marvellous company find a larger audience.

This has always been a great frustration of mine over my many years of attending the Hamilton Fringe: that often something off the beaten path artistically does not get the support that it deserves from local audiences. Last year, it was a two-hander from Paris, France called "Twenty Five" that played to very small audiences up at the Zoetic Theatre. It too lives on in my mind as a wonderful theatrical experience.

I am grateful that I saw Babel-o-drome, and hope that they continue to present this kind of rare theatrical experience across Canada.