A Woman of a Certain Age 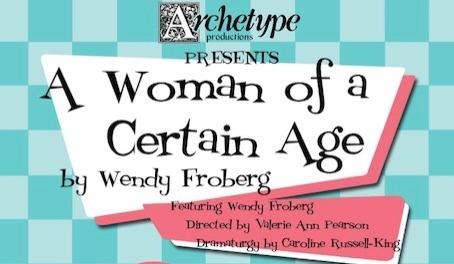 Some titles are so 'descriptive' that they immediately write a story in your head. How I Met Your Mother, Friends with Benefits, Snakes on a Plane spring to mind. A Woman Of A Certain Age is such a title, and says, yes, this is a cliché but you at least know what you're in for and we're going to do something with it you weren't expecting.

I've seen a lot of Fringe in multiple cities, but Wendy Froberg's performance is a gold standard of what small stages and minimal sets can do. Referring to the sketch of the stage I made in my notebook I see a desk, a laptop, a basket, a wine glass, three chairs, a shopping bag containing an item I won't reveal, and an ottoman.

Froberg moves from one prop to another, sits, stands, stands on chairs, and turns back and forth and back again as she assumes two characters in a single conversation. I lost track of the number of characters she plays, and the number of two-person interactions in the play. The choreography is brilliant, and her ability to create closeness and distance between the characters she plays is breathtaking.

Her 'women of a certain age' have many and varied problems. Some, like care of a disabled child or the demands of a failing mother would be a heavy burden anywhere. Others might be characterized as 'first world' problems, and the play is intelligent enough to know this. In one of the more poignant moments, Froberg assumes the persona of an immigrant aesthetician who reminds her customer that where she comes from a woman who lives long enough to acquire wrinkles and a sagging body is fortunate indeed.

It's easy to fault this play for its predictable situations: husband leaves wife for a younger woman, daughter wishes her elderly demented mother would simply die and has accompanying guilt for these feelings, abandoned woman is thrust into the world of internet dating, woman uses cosmetic surgery to look younger when really it's not the surface but the soul that matters.

Watching the play, I often felt the situations were typical rather than individual. On refection that's not how the play works. The actor has to be so many characters there's little time to make any character complex. It's rare that Froberg remains in a persona for over a minute.

Add to that that in many cases she's having a conversation in which we hear what she says, but the responses of her invisible partner have to be assumed by her body language in the ensuing silence.

Amazingly, Froberg knows how long to make these silences, and exactly where to put her eyes and her hands during these interactions with the invisible other. How she turns her body during a hyperbolic lament that she has more cleavage in her back than her front is more graceful and affecting than it has any business being.

Like sculpture, theatre is about the body. Where it differs from sculpture is that it moves. Froberg has the movement of a dancer and a sense of how her body relates to everything on the stage.

This is the play's sly paradox. The subject is the decline of a woman's physical beauty and the fear and desperation that brings. But this decay is vindicated by a performance whose success lies almost entirely in its deft physicality and I encourage you to keep this in mind when you see it.