US House Vacancies Way Up as Bubble Continues to Deflate 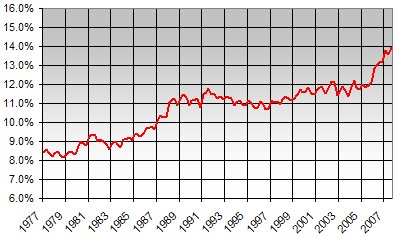 The national vacancy rate rose during the 1980s from a low of just over 8 percent, peaked after the 1991 housing crisis, and remained steady between 11 and 12 percent until 2005, when it rose dramatically as the housing bubble began to collapse.

This crisis really is different from the 1991 crash, which seems pretty tame in retrospect. As the crash heads into its third year, there is no indication of a turnaround.

The rate of foreclosures is still high, and the US Treasury expects this trend to continue for the next 18 months.

The high inventory of vacant houses, plus a steady stream of new market entrants via ongoing foreclosures, means house prices will remain soft despite recent attempts by the US Federal Reserve to cut interest rates and spur demand.

As a result, homeowners with adjustable rate and/or subprime mortgages will remain at higher risk of foreclosing, creating a pernicious, self-reinforcing feedback loop.