US Dollar Flirts with Parity amid Cascading Financial Crisis

This week, markets were aflutter with the news that the US Federal Reserve cut the key federal funds rate by half a percent in an attempt to prop up domestic consumer markets and insulate the beleaguered mortgage industry against more foreclosures.

The effect on the US dollar was immediate: after five years of steady declines in value, it dropped still further against the euro (it now costs $1.40 to buy 1 euro) and is flirting with parity against the Canadian dollar. 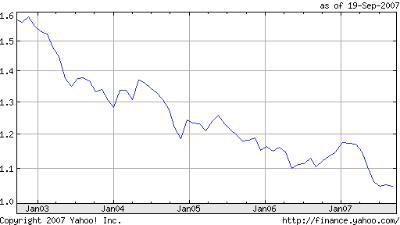 There is now a growing danger that global investors will start to shun the US bond markets. The latest US government data on foreign holdings released this week show a collapse in purchases of US bonds from $97bn to just $19bn in July, with outright net sales of US Treasuries.

The danger is that this could now accelerate as the yield gap between the United States and the rest of the world narrows rapidly, leaving America starved of foreign capital flows needed to cover its current account deficit - expected to reach $850bn this year, or 6.5pc of GDP.

This is strong evidence of just how inflationary the Fed's interest rate cut really is. It also demonstrates the severity of the mortgage crisis, which started with bankruptcies in the subprime lending industry and has spilled over to prime mortgages and other financial institutions, even in the UK and Germany.

Robert Toll, CEO of the massive Toll Brothers home building company in the US and hence highly sensitive to market fears about the state of the housing market, responded to the dramatic cut by saying, "I would have done a quarter instead of a half because it signals we're in deep doodoo."

It looks more and more as though the long-predicted - and long-thwarted - collapse of foreign confidence in the US dollar is finally upon us. The International Herald-Tribune reports:

"This is all pointing to a greatly increased risk of a fast unwinding of the U.S. current account deficit and a serious decline of the dollar," said Kenneth Rogoff, a former chief economist at the International Monetary Fund and an expert on exchange rates. "We could finally see the big kahuna hit."

Financial institute bankruptcies and the slow dissolution of the petrodollar system are conspiring to erode foreign buyers' willingness to keep taking a risk on dollars and dollar denominated assets.

It was Iraq, back in 2000, that originally abandoned the petrodollar system, in which OPEC countries agree to sell oil exclusively for US dollars. When Saddam started selling oil for euros, he gained 17 percent in revenue as the euro gained against the dollar and earned further enmity from an administration already chock-a-block with reasons to oust him.

After Iraq went off the dollar, Iran, Syria and Venezuela began to follow suit. All became the targets of steadily escalating US threats, aggression, and interference, including an attempted coup d'etat in Venezuela and the gathering momentum to launch military strikes against Iran.

Iran has abandoned the petrodollar system completely, selling oil for a basket of other currencies including euros and yen, while Venezuela will trade oil for anything. Even Saudi Arabia just announced that it will not follow the US lead in cutting interest rates, which effectiely de-pegs the Saudi economy from the dollar - not an abandonment of the petrodollar system per se but certainly a rebuke against it.

The only way the US is able to live beyond its means and import more than it exports every year is if the rest of the world continues to buy those excess US dollars, and the petrodollar system is a big incentive to keep buying.

The Fed cutting interest rates was a desperate act by a regulator torn between keeping domestic spending up (and preserving over-exposed financial institutions from disaster if more Americans foreclose on their mortgages) and reining in de facto inflation in the US dollar.

They decided in the short term to bail out the lenders and stop the spread of mortgage defaults into prime borrowers, but the result is a continued decline in the value of the dollar as foreign buyers turn down the opportunity to make less interest on an already risky currency.

Sooner or later - and probably sooner - the Fed is going to have to reckon with this, or the US will simply no longer be able to go on trading little green pieces of paper for its imports.

If and when the Fed does raise interest rates to try and attract foreign buyers, the effect at home will be to nail the last coffin in the housing boom and push the US into a deep recession.

The US dollar just hit parity with the loonie and it looks like it's going to keep heading south!

Perhaps, sooner or later, Congress will abolish the Fed, as advocated by Dr. Ron Paul, member of Congress from Texas, who is now in the running for U. S. President.

I'm not an expert in economics, although I do have a law degree and a Ph.D. (piled higher and deeper) in another more academic realm. My reading of the situation, which I've been following since I got into the stock market about 10 years ago, is that the world economy is probably in for some very, very painful transitions.

The question is, where should Canadians (many of whom, relatively speaking, "savings-rich" put their cash? I'm 54 years of age, with a pretty large cash nest egg. I'm very nervous. Very nervous.

i've recently moved parked cash to USD, for short term gains.... the loonie won't stay this high forever, then I'll buy back my loonies. ING is paying the same interest on loonies and greens.

long term cash is the Euro, it will be the world reserve currency in about two years, especially if UK switches to the Euro and more oil exporters switch to petroeuro from petrodollars.