The Triumph of Image over Substance

The BBC reports that London flew in enough sod (dug up from Yorkshire) to cover Trafalgar Square with a lawn to demonstrate how London is "the greenest capital in the world." 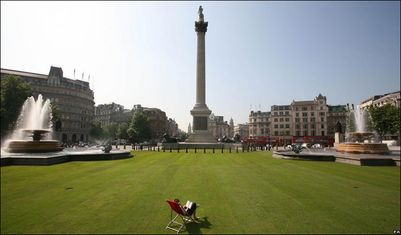 Yep, nothing says "green city" like transporting grass in an airplane from a different part of the country to it for a photo op.

ha ha....classic story. Don't people think before they do such stupid things? I love the one guy sitting there enjoying the beautiful day....biggest yard he's ever chilled on.

how about finding us a picture of Yorkshire where they dug this all up from?? I'm assuming it's a REAL green city (except for right now when all it's grass is on display in London).

Ah c'mon folks. Don't be so cynical! I think, if nothing else, all that Yorkshire sod shows Londoners the POSSIBILITIES. It will help them see how life can be if we only allowed ourselves to go green.

It reminds of a rally they had in Toronto once, where a truck pulled up and all the activists laid sod along King Street downtown. Or the recent Queens Quay makeover where they laid sod on the road for one week only.

It allows us to see how things can be if we only have the will.

PS I think the sod might have come from Leeds United's Elland Road ground. After the season they had perhaps they figured they'd be better off playing on concrete...

There is no greater irony in that manicured grass, so literally green, is so figuratively not.

But there are many who don't - can't- get that concept. The marketing line is too powerful, who could not love the lush, green, "healthy" lawn.

That's what they see. I see the floral equivalent of a dialysis patient with metastatic cancer who's just had an extreme makeover.

You know what, I'm sorry, that was not a good analogy. Apologies to people with cancer and kidney failure, those are both diseases of bad luck, not conscious self-destruction.

Heroin addiction would be a better metaphor.

How's this for an analogy, Ted: turf grass is 'green' the way an embalmed corpse is 'lifelike'.