Some civic discourse on the back of the old government building at Main and Caroline: 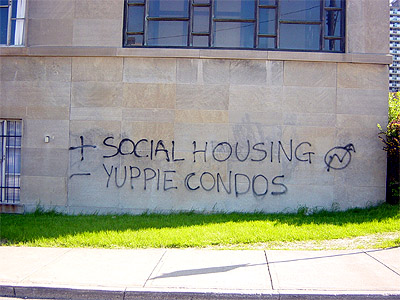 Honestly, how is that a formula for downtown revitalization? What, with all the downtown halfway houses deterring people already, is more social housing going to bring people downtown? No. It'll just make it more of a ghost town. Not saying that condo development is the answer either, though it is usually end result of successful revitalization. Create more public spaces. Make access easier. Give people a reason to go downtown. Then build the condo's.

That's right. It's not about either or. It's about both.

How successful is a middle class suburb with nothing but detatched homes? How does this separation of income levels improve the overall health of our community? Similarly, how does a segregated affordable housing enclave improve our community? It doesn't. People respond to their environment and if their environment is nothing but white well-fed faces and leaf blowers, or drug deals on every corner, then nothing much will change.

Separating different types of housing is not beneficial for the overall community. What you need to do is create the right mix. This can be a very delicate balance - you don't want a huge homeless shelter thrown into the middle of a middle class sub division. Neither do you want a single 4 bedroom halfway stuck in the middle of a Forest Hill or Bridal Path - you have to get the mix right so that everyone feels that they belong, and everyone feels safe.

Good examples are Esplanade and Roncesvalles in TO (and the soon to be redevloped Regents Park), in Hamilton I would look at Locke Street (north of Aberdeen) and the neighbourhoods turning around along James north. It's a shame there are so few good examples.

I'm confused at the 'connection' between downtown halfway houses and public housing?? Check out CityViews and CityPlaces on King East at Walnut. Both are city housing projects. And both have contributed amazingly to the rebirth of the International Village. Rusty is right...we need both affordable housing and 'yuppie' lofts or condos. Finding the balance is key, but excluding one for the other would be disasterous.

The 'discourse' certainly conveys the frustration many in the community are feeling around the lack of affordable, accessible, safe and appropriate housing in the community.
There are by some estimates 8500 families (not individuals) on the waiting list for social housing locally.
The feds stopped building social housing in 1993, the province stopped in 1995 and only now are we seeing some very, very modest investments back into public affordable housing (mostly through rent subsidies).
Coincidently, there will be a forum hosted by Hamilton's Affordable Housing Flagship and CMHC on June 7th entitled "Making A Difference: meeting housing needs and building community". I would encourage anybody interested in attending to check out details on the Social Planning and Research Council's website: www.sprc.hamilton.on.ca

Absolutely, balance is the key.

The problem is that the downtown core is already out of balance.

I fail to see how building affordable housing downtown is going to help revitalize the core. How about some affordable housing in Stoney Creek or Ancaster? Those communities are out of whack too. Certainly Toronto has spread out their social housing.

And jason, I did not intend to lump social housing and halfway houses together, except to illustrate that the downtown core, like most downtowns, already has a considerable social 'stigma' to combat.

Revitalization depends on your vision of what is "vital." Determinants of health are generally measured by the well-being of the most vulnerable populations...
How are we measuring up?

Once halfway houses start dissappearing as a result of their prime real estate value, this should at least be noted as an indicator that we have sorely failed as a city....

P.S. Regent Park is hugely gentrified already, with encroaching Cabbagetown, as is Roncesvalles. One look at the municipal eviction data tells this story.

I think you are saying that the yuppies are taking over Regents Park - yes? The creative classes move in, the house prices/rents go up and low income folks get evicted - am I on the right track?

I'd have to defer to your knowledge on the Regent Park evolution, I haven't looked at any data. But when I stroll around the Regents Park/Cabbagetown area it strikes me that these are still very segregated in that Cabbagetown is still a pretty well-defined enclave of white middle-class, mainly childless residents living in solid, expensive older row houses between Dundas, Parliament, Bayview and whatever that one to the north is.

Once you go west of Parliament and south of Dundas it's affordable housing all the way. As with most neighbourhoods there is no real mix in this neighbouhood (my reference to Regents Park was the proposed development there, which includes a mixtures of all types of housing).

Roncesvalle is being swallowed up though. The Yuppies are coming! I saw the same thing happen in Toronto's east end, when I lived at Pape/Danforth. Little (i.e. affordable) homes were bought up along Browning and all areas north and south of the Danforth between Broadview and Pape, and then knocked down and replaced with Super Yuppie structures for white Execs and their 2.2 kids.

What was once a nice mixture of different income types became another Yuppie enclave. I used to stroll down to Carrot Common on the Danforth and watch the young urbanites fuss over which bagels to select for their Sunday brunch. You can get a very shallow view of the world living in such places (OK, so now I'm being cynical...!)

I'm not sure how you prevent this Yuppification of 'up and coming' neighbourhoods. Obviously if the affordable homes are owned by the municipality or province that would help I suppose. It would prevent the sell off. I'm not a fan, however, of massive institutionalized housing. Homeless shelters are a case in point. I may be a booster of mixed neighbourhoods but I'm not going to support a 600 bed homeless shelter in my back yard. That's nonsense. Scale is everything.

I'm assuming many of our poverty activists have more enlightening ideas and solutions for this topic. I agree with Ryan that Revitalization fanatics like us are often seen as being at odds with Anti-poverty folks. That's a bad thing, and it's not reflective of our 'agenda' at all. Nobody here is suggesting wide-scale gentrification as a solution for urban woes. As I said in my last post, the wholesale replacement of lower income residents with middle-income folks does nothing, in the long run, to revitalize the city. You may have coffee shops in place of laundromats but the fundamental poverty issues are not addressed, and the city, as JH says, ultimatey fails.

OLD COOTE's original message implied that decent, monied suburbanites will not want to come to Hamilton's downtown if there's too much social housing- too many poor folks, I think he means. He backs off a bit in his second response, but is still concerned about the balance.

The notion that Hamilton must chase away its poor in order to attract wealthier folks from the suburbs is a non-starter. It doesn't work. It is discriminatory. And where are they to go?

Secondly, people who like the suburban life, with two SUVs in the drive to get to the mall and the soccer field and the corner variety store, are not coming downtown. They don't easily give up illusions that the suburbs are safer and more convenient. They've already bought their SUVs and don't like paying to park them on city streets. They don't work in Hamilton, so they want to be close to the highways, even if proximity doesn't actually put them on the highway any faster. They've made their investments. Those in the suburbs aren't ever going to come back downtown to shop etc. in sufficient numbers to save the downtown economy.

There's no economical benefit in trying to chase away the people who are already downtown, supporting whatever economy there currently is. If poverty seems to be concentrated in the city centre, the answer is to develop a neighbouring economy that includes the poor, providing proximate places to work (restaurants, pubs, theatres, galleries, etc.) and live (subsidized housing.) When it looks like that's working other creative businesses and commercial opportunities follow.

I agree...and the downtown population is already quite mixed. It's growing and will continue to do so. Whether or not someone from the suburbs wants to come downtown is completely irrelevant in my mind. There's over 30,000 people who live within a 15 minute walk of Gore Park. And many thousands more between Westdale and Gage Park. A quick streetcar line east/west through the city would bring many of them downtown more often. The turnaround began a number of years ago and is continuing. I'm sure some folks from the suburbs are enjoying it, but it really doesn't matter.

True you are not going to 'force' people to live in a mixed walkable neighbourhood like downtown if they like the suburbs. And yes, I know many folks who love the suburbs. But what is going to have to happen is that we are all going to start having to pay the true cost of living for our respective neighbourhoods. Simple economics tell us that the true cost of living in the suburbs is much higher than the cost of living in a close-nit walkable neighbourhood. We subsidize these costs because municipalities want to encourage development - especially as it is often seen as the major 'growth' area for the city, and because many of the developers are the councilors friends. But it can't continue forever.

So by all means, everyone should live where they want to live, but they should pay the true cost of doing so.

If only we'd renovated that place rather than build new. It would have been adequate enough to hold most of the tenants of the new one, and more if an addition was made off the back. In the years leading up to its vacancy most of the floors were vacant and full of junk. Beautiful place. I hope they make the most of it.