The Innocenti Report Card 7 [PDF link], A recent study by UNICEF, compares 21 OECD countries for the wellbeing of their children based on the goals set forth in the UN Convention on the Rights of the Child.

The relatively comprehensive report is a first step in creating a regular monitoring of child wellbeing across the OECD countries, and it assess the countries based on six broad criteria: material wellbeing; health and safety; educational wellbeing; family and peer relationships; behaviours and risks; and subjective wellbeing.

According to the Times of London, Professor Johnathan Bradshaw, one of the report's authors, explains why Britain has the unhappiest children:

Between 1979 and 1999, children were relatively neglected in Britain, child poverty rates rose rapidly, those living in workless households soared and the numbers not in education or training also rose.

The more unequal a society, the relatively deprived people will feel, and child poverty is still double the rate it was in 1979.

Reports like this are important because, as the main findings note:

measurement and comparison gives an indication of each country's strengths and weaknesses. It shows what is achievable in practice and provides both government and civil society with the information to argue for and work towards the fulfilment of children's rights and the improvement of their lives.

Some of the particular findings in the report were startling. On the comparison of relative income poverty (percentage of children in households with equivalent income less than 50 percent of the median), for instance, the United States wasn't simply dead last but was way out on its own. 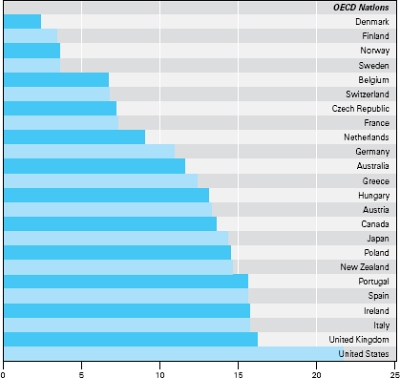 With Hamilton's recent dedication to becoming the best place to raise a child, the comparative findings in this report are especially relevant. Watch for more analysis as we dig deeper into the data.