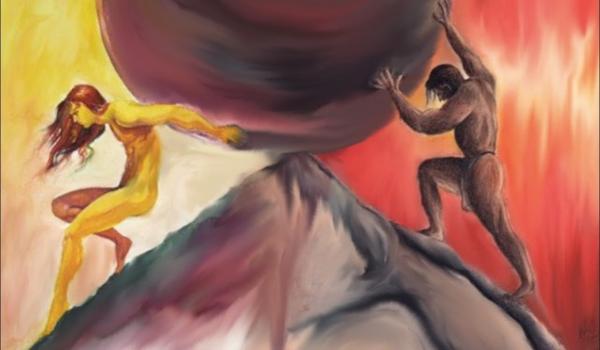 not_ALL? Filetype:Unknown is a show that you just can't look away from. It's a existentialist, surreal gender treatise put on stage that will leave you asking why. It's a brave a daring show from a young theatre company from Toronto, Third Wheel Theatre.

From the beginning of the show, we're greeted by either She (Katherine Basile) or He (Daniel Sutherland), depending on which aisle you decide to walk down. The two characters are drinking wine (stage wine, which is not real wine). It's never really explained why that's happening. At the same moment, Them (Jordan M. Burns) is face-down on stage, and he's attached with some fairly cheap looking plastic ties to a paper-mache boulder. This is Fringe, people, embrace it!

Most of the time, He and She bicker back and forth in some kind of commentary on gender identity and gender roles. At times it's unclear what the message was, but that's OK. There's lots to see, such as He performing oral sex on She from half-way across the stage, or each of the actors taking turns acting like dogs. There were times when it was as interesting watching the reactions of the other seven members of the audience as it was watching the action on stage. Particularly interesting was watching Them explode from the floor to interrupt dialogue to yell "Insert Name Here".

not_ALL? Filetype:Unknown is destined to be a play that people who see it will remember for years to come, much like other cult classics like Tommy Wiseau's The Room or Ed Wood's Glen or Glenda? This is the play most worth seeing at The Westdale.