We've Come From Away (Toronto) 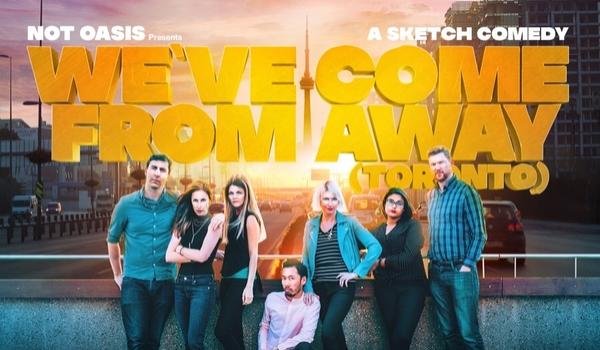 "We've Come From Away (Toronto)" is a sketch comedy musical theatre show that riffs on the divide between Hamilton and Toronto. At times parodying the Canadian Broadway hit musical "Come From Away", I found this wonderful production to be a fabulous evening out on a quiet weekday night.

Here is a quotable bit of review for them - I laughed! I cried! I was sorry that it was over!

Created by Not Oasis, an award-winning sketch comedy troupe based out of Toronto, their current production is so well produced, staged and performed that it felt to me like what a Fringe play as produced by the Mirvishes would feel like!

Moving at the speed of sound, or at least at the speed of a car full of actors late for a performance in Hamilton, this is a funny, professional and slick show, with detailed and well thought out ideas and strong production values. There were seventy sound cues in a sixty minute play!

Most of the actors in this show are alumni of the Second City training program, so it certainly has the same contemporary vibe of the productions in that theatre. Although the entire ensemble of performers were strong, I found King Chiu, Jennifer Ashleigh Lloyd, Anne McMaster, and Christopher O'Neill to be the most compelling to watch.

The direction by Jan Caruana was top notch. The sheer speed of this production was inspiring, and thus the laughs from one joke started before the previous one had faded away. It is no wonder that they won Patron's Pick and NOW Magazine Critic's Pick for their show "Alone in this Together" at Toronto Fringe.

I must make a special mention of stage manager Chris Middleton up in the booth. This production relies heavily on sound and lighting cues landing precisely at the correct moment, with the same timing as a well told joke. Middleton must be a master at calling a show as there must have been ten cues on every page of the script.

Once again - I laughed! I cried! I was sorry that it was over!

Check it out Hamilton, you will not be disappointed by this one. This production is a great entry in the 2019 Hamilton Fringe that will be enjoyed by everyone who sees it.