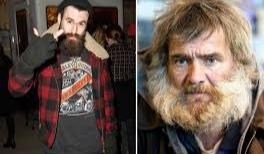 First off, I must confess that I am a huge fan of the plays of Sky Gilbert. I saw my first one, "the Whore's Revenge" at the Tarragon Extra Space back in 1989, and have admired his writing ever since. Also, Sky is a rather prolific writer, which means in any theatre season he has produced at least one brand new play and often more.

I like the fact that his plays are fearless and that he is not afraid of controversy. I also like that in the past decade or so, he has written a whole series of Hamilton-specific plays, which were written to be performed only here in this city. Often the scripts are based upon people he has met or issues that face the community. Over the years, I have tried to make an effort to see all of them.

Such is the case with Gilbert's latest play, "Bungalow", which is being performed at Artword Artbar.

The main issue that it deals with is gentrification. About how the social fabric of the city is being transformed by the sudden influx of Torontonians, with large sums of cash in hand, who are buying up properties and raising the rents, often making it difficult for people who have lived in the community all of their lives to survive in this new reality.

The play features two characters, a recently arrived coffee shop owner "Kiefer", played by Tim Walker, and his next door neighbour, who is addicted and unemployed, "Lloyd", played by Shaun McComb. They share a common yard and they collide one evening in a cloud of suspicion and hostility. "Not very neighbourly are you", Lloyd observes.

One man is uptight and stressed out and easily offended, while the other is drunk, stoned, and more open about his sexual behaviour than is typical for strangers who have just met.

Much of the humour and impact of this play comes from the collision of ideas and points of view. It also demonstrates that happiness in life comes from knowing who you are and accepting it, not by the yardstick of how wealthy that you are.

Unusually for a production in the Fringe, this is a fully professional production with actors who had significant professional theatre credits, so it comes across as a something different than the more typical actors who are in the early stages of their career. This is something carefully constructed and well staged, with a strong opinion and a finished polished script.

If you like theatre that has ideas as well as humour and has something to say, I would encourage you to catch one of the final performances of this play in the last few days of the festival.