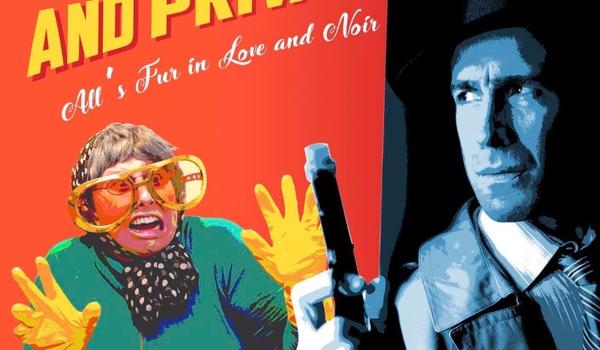 This touring production coming all the way from Calgary, Alberta is tight, compact, thoughtfully realized and delivered with utter conviction by its two-person cast.

"Bushtits, Shihtzus & Private Dicks", riffs off of the "film noir" conventions of certain films from the 1940s, which, using the cinematic styles of German Expressionism, told sordid detective stories populated with femme fatales and hard boiled detectives. Certain conventions, like morally ambiguous anti-heroes and the never-ending divides between light and darkness, make this a fascinating genre to recreate in a stage play.

The cast of the play features Trevor Matheson as "Les", a dollar store clerk with a passion for old movies, and the ever mercurial Melissa Dorsey, who plays forty characters onstage in this production.

The pace of this play is quick, lightning quick, and it moves so quickly that if you blink you might miss something. The sheer ballet of objects, hats, props, costume changes, with doors opening and closing, makes you dizzy while watching it.

The plot explores a series of unexplained disappearances of pets in a small high-rise apartment building. Our meek and mild mannered dollar store clerk becomes a cool hard boiled detective with a fascinating interior monologue whenever he puts on a prop fedora hat. The endless back and forth, with changes in lighting and sound, demonstrates that someone up in the booth was hitting all the cues, perfectly, every time.

This play earned a well-deserved standing ovation at the end, but as always, with productions that come to the Fringe from outside of the GTA, they live and die by word of mouth in getting an audience out to see their play.

So, check out this production, Hamilton! I think that you will find that it is well worth the effort.