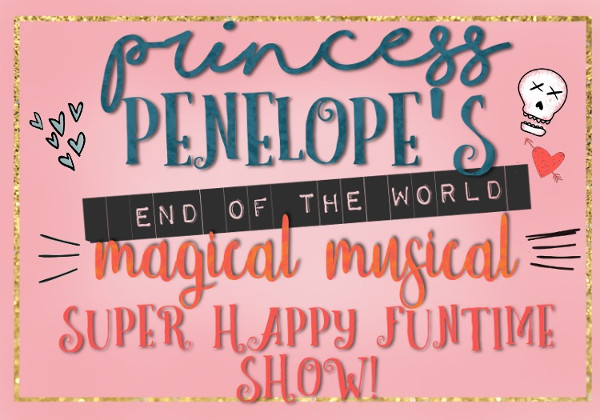 People are often told not to judge a book by its cover, and I will confess that I had certain expectations when I went to see Princess Penelope. I expected a steady stream of childish humour, or perhaps a show full of ironic dark comedy. However, what I actually saw was much better than anything I could have anticipated.

In Princess Penelope, everyone is invited to the post-apocalyptic survival bunker of the eponymous Penelope. She quickly informs us that although "bad things" have happened, she and her pure-hearted audience can seek refuge in the magical land of Happinese.

This sharp contrast between Princess Penelope's eager optimism and the harsh reality of the world around her is an important source of humour throughout the play, but it eventually proves to have the potential for more than just comedy.

As apocalyptic dangers continue to mount, Penelope's constant happiness becomes increasingly untenable, and the tension culminates in a genuinely shocking turn of events.

Princess Penelope features a moderately large cast of characters, but most of the play's interaction is between Princess Penelope and her best friend Sammy. Vicktoria's performance as Penelope is incredibly convincing; she never fails to sell the idea that Penelope's happiness is completely genuine.

Meanwhile, Ryan Sim as Sammy provides her with a much-needed foil and voice of reason, relying on a combination of sarcasm and genuine advice.

The play involves a significant degree of audience participation, but it does not actually break the fourth wall. Because the audience is treated as an aspect of the story, they are consistently addressed directly by the play's characters. At several points, the audience is prompted to engage in a group activity, such as standing under a giant parachute or chanting positive words.

At one point, they even prompted audience members to individually respond to something, although nobody was singled out and forced to do so. I had initially feared that this would feel intimidating or embarrassing, as other plays based on audience interaction have in the past, but instead it made me feel like I was actually a part of the experience.

Princess Penelope impressed me with the depth of its story, the growth that its characters demonstrate, and the meaningful ending it eventually reaches. I also liked the unique way in which it interacted with its audience: enjoying a play as a spectator is one thing, but actively having fun and participating in it is truly rare in theatre.

For all its dark humour, Princess Penelope is ultimately a positive viewing experience, and I can almost guarantee that you will come out of it feeling happier than you did before.