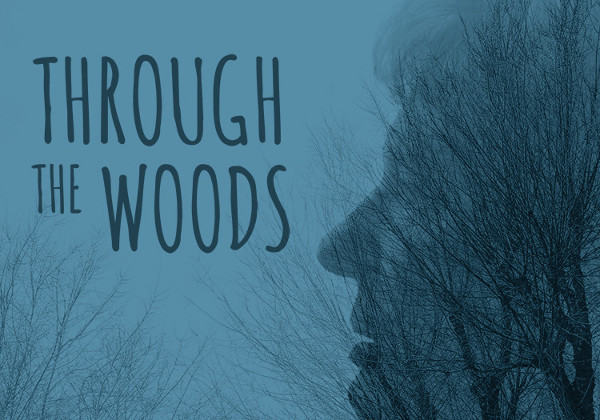 Through the Woods is produced by Open Heart, written by Steve Hartwell, produced and directed by Kelly Wolf. Open Heart theatre is a company that seeks to "manifest a view of the world that is positive, inclusive, and supportive" and wants to tell stories about the human experience.

The plot revolves around a mother in the early stages of Alzheimer's, cared for by her younger son. The mother wandered off one day, and the younger brother contacts his sibling, estranged for ten years, to return. The older son arrives, and conflict ensues. Questions are raised about freedom of choice, personal responsibility, and who cares for the carer. It says much for the honesty of the writing that no quick, trite answers are provided.

The set is simple, but well adorned for a fringe production. A curtained window sits upstage right, centre stage is a sofa with two wing chairs on either side of it. In front of the sofa is a table. Resting on the stage left chair is a wool sweater that will have some significance through the play.

The play is well written, the characters dialogue is natural, and they are fully human with complex personalities and motivations. If there is any criticism I would have, it's that nobody changes through the play; the characters at the end are the same as the beginning, the relationships between the three are largely unchanged.

The direction is well thought out. The characters move around the stage with purpose. The set is used to good effect to provide different levels for the actors to perform at. All three of the actors seem comfortable in their understanding of the roles they re playing.

Good writing and good directing can be wasted if the actors are not up to the job. Fortunately, that is not the situation here. Jared Lenover plays the long-suffering younger brother Kevin. Kevin is not the nicest guy in the world, and Mr. Lenover has made the choice to not make him in any way sympathetic.

This resulted in some expressions of shock from the audience at the way he treats his mother. It's a brave choice, keeps the play very interesting, and if the audience is reacting that strongly to your performance, you know you're doing something right.

Jesse Horvath plays the prodigal son Jeff. He swoops into the house well-dressed, well-coiffed, and full of sympathy and kind words. His character is the polar opposite of Kevin, and he does an excellent job portraying a flawed but fundamentally decent human being.

Finally, there is Jo Skilton as Ruth. She plays a character in the early stages of Alzheimer's, and it's mesmerizing. Within a few lines she goes from a mischievous troublemaker to a loving mother to a person living in another time. It would be so easy to put on an affected performance in this role, but she avoids that completely and presents us with a fully realized character.

The play does not provide a trite answer to this family's dilemma. In fact, it provides no answer at all. The audience is left to decide how they think the situation will resolve. This is a play well worth seeing. At times funny, at times sad. Well written and directed, beautifully acted, it should be one of the hits of the Fringe.