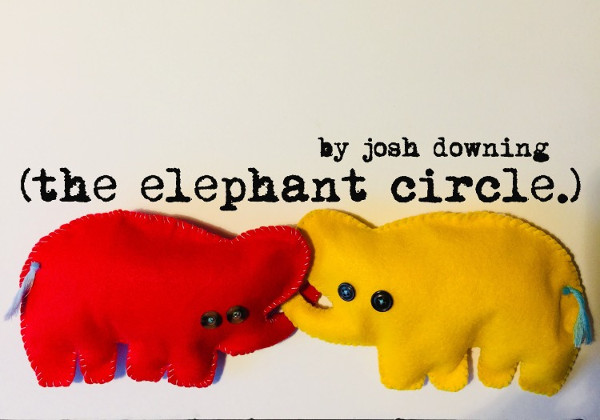 Fringe play "the elephant circle." by Josh Downing is a difficult play about a difficult subject. It deals with issues of physical and sexual abuse of children and adults, and the effects of that trauma when the children grow into adults themselves.

One of the biggest effects, one that is referenced through the show, is secrecy: how lack of communication can lead to misunderstanding and conflict, and inhibit healing.

The play takes place in a variety of locations. Initially the stage is sparse and the only items are a coat rack up stage with a suit jacket, shirt and tie on a hanger. Behind this, a light gives the impression of a four-pane window.

Through the show, various props and items of furniture are brought on stage and moved around by the actors. Many of these move with the actors from place to place, representing physical items or emotional baggage from childhood that adults carry with them their whole lives.

This moving around takes place between every scene, and I found it disruptive after the first couple of scene changes. The disruption came partly because of the length of time these changes took, and partly because they interfered with the flow and momentum of the play, requiring each scene to re-engage our interest.

The scenes themselves do not take place in chronological order, and at times I found myself having to figure out what point in these characters lives we were watching. There are enough clues in the characters' dialogue and clothing to work it out, but for me at least, it wasn’t always immediately obvious.

What is obvious is that director Lindsay Ryan has a clear vision of this play, and what she wants it to look like. The set pieces, the costumes, the movement of actors around the stage as they go from scene to scene and place to place, all speak to a director who thoroughly understands the play she is directing.

The play follows a mother, son, and daughter, dealing with the effects of abusive behaviour that runs through their family. Tragedy stalks this family; the son has substance abuse issues exacerbated by a terrible event in his recent past, and the daughter faces a health crisis after a death in her immediate family.

In attempting to deal with these events the family comes together, albeit not willingly, at their cottage and it is scenes from this coming together that start and end the play.

Acting any of these characters and situations is going to be a challenge and the performances are a bit of a mixed bag. Each of the actors had strong moments, and then moments when I felt they overplayed their roles.

Of the three, Kara Dymond as the luckless daughter Andrea, gives the strongest performance. David O’Garr as Andrea’s brother Tom and Joanne Steven as their mother Marion both have strong moments, but I felt their performances often felt forced.

The play itself is almost unremittingly sad. Tragedy and pain builds on tragedy and pain until a final slight ray of light at the end. This not a show I would recommend to anyone who wants something to cheer them up. If, though, you want to see a thoughtfully written play about an endemic problem, then go and see the elephant circle.