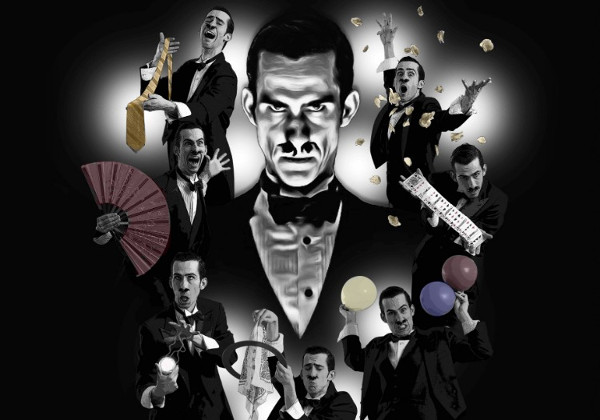 Being a magician and being a comedian are two very different things, but both of them require a lot of practice and dedication. Steve Boleantu could therefore be seen as doubly practiced and dedicated, since his performance in A Shoddy Magician In A Parking Lot skillfully blends both of these elements together.

Boleantu plays the role of the eponymous "Shoddy Magician", who shows off his magic in the equally-eponymous parking lot of the Staircase Theatre. My showing was forced into the basement of the Staircase by rain, but Boleantu took it in stride with charm and wit.

Throughout the 45-minute performance, he was always engaged directly with the audience: delivering quips, making conversation and bringing up volunteers. I found these engagements to be consistently respectful and polite, which is not necessarily always the case when the fourth wall is broken.

Ostensibly, Boleantu's magician character is exactly as shoddy as his name would suggest, although his flair for the dramatic is entirely befitting his profession. Much of the humour comes from the unorthodox ways in which he proceeds with some of his tricks, and in his over-the-top reactions to the outcomes of the efforts.

His antics belie his true talent, however, as he always manages to keep the audience from spotting what he is up to until the moment he is ready for the punchline. His tricks make clever use of repetition, yet they always manage to subvert your expectations somehow. Even when the end result is deliberately designed to appear mediocre or strange, the buildup always creates the convincing impression that something incredible will happen instead.

A Shoddy Magician In A Parking Lot does not authentically feel like the work of an amateur magician, and it would not be nearly as entertaining if it was. Instead, it feels like the product of a talented and innovative mind, carefully constructing a façade of mediocrity in order to combine magic and humour.

His ability shines through in the subtle preparation put into his tricks, and in the brilliant timing of his supposed mistakes. The audience's reaction spoke for itself: everyone was laughing and clapping the whole way through.