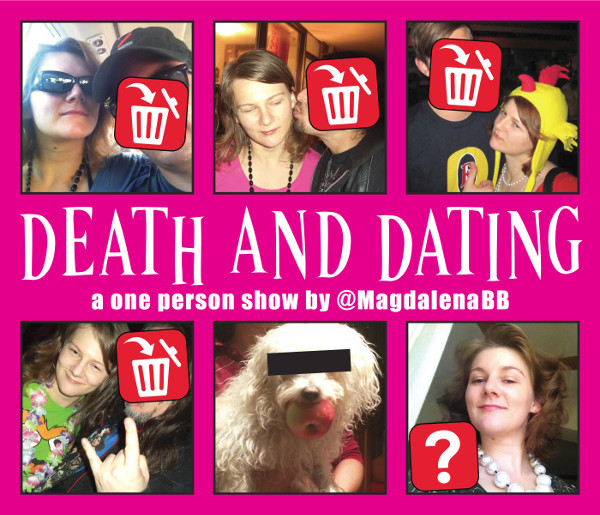 It takes a lot of courage to get up on a stage without the security blanket of any props or fellow cast members. With the exception of a sombrero, this is exactly what Toronto-based stand-up comedian Magdalena BB does in her one-person show, Death and Dating, which takes audience members on her journey of a breakup, dating, and recovery.

Beginning with a gritty version of "You're So Vain," Death and Dating is classed as a musical, but be warned. This isn't The Sound of Music or Chicago. Between the screeches of intentionally bad karaoke versions of pop songs from the 1990s, Magdalena recounts her experiences as a newly single thirty-something.

Death and Dating explores similar themes as another Hamilton Fringe Festival play, ONEymoon, but it's a much darker journey. There's a lot of yelling and a lot of anger. Quite frankly, Death and Dating can be grating. This play won't be for everyone.

In Death and Dating, Magdalena BB takes on multiple roles, which prove confusing, mostly the result of poor transitions and awkward timing. However, this is Magdalena BB's first one-person show, so with practice there's room for growth.

In the play's final moments, Magdalena BB finally asks herself the question she needed to ask all along. She asks herself how she's going to pick up the pieces and move on. We've all been there.

Death and Dating may not be polished, but it's relatable for every one of us who has ever suffered a broken heart and has had to pick ourselves up off the floor.