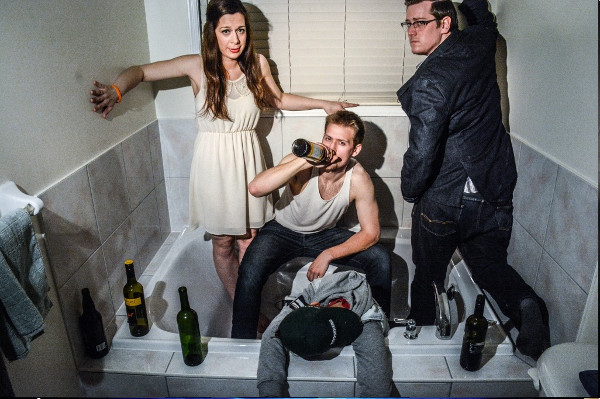 As a newcomer to Hamilton, I wanted to see Rowing to get an extra taste of the local flavour. I'm not sure if that's what I got in a roiling hour and ten minutes of profane, youthful sweat and insecurity. Of all those elements, insecurity forms the crux.

Everybody here has something to prove, ostensibly to someone else, but always on the basis of their own warped understanding. The targets of frustration are familiar and universal - a lack of maturity, under- and unemployment, sexual inadequacy. But each character's self-perceived flaw and self-conceived solution is formed in the echo chamber of their own mind.

This dynamic throws an interesting light on how they view their own city. In the anguished words of one, the "downtown core looks like a nuke went off in it." For better or worse, they still feel bound to stand by their hometown, commuting from the outside if necessary, to defend where they're from and maintain its legacy, whatever that may mean. As usual, their insecurities belie the strengths they never suspected they had.

Come to this performance ready for a lot of yelling and nearly nonstop emotion. Violence, profanity, alcohol, and sex all have their role to play. Get past those, however, and you'll notice an interesting and creative theatrical take on digital communication.

The cast puts in strong performances, too, with Andrew Markowiak playing Rick Epstein, a bit of a sad-sack who's pathetic, conniving, resilient, and sympathetic all at the same time. Rachel Estok is completely convincing as Chris (or Kris?), a tight-skirted blonde with a mickey of vodka in her purse.

So while I'm not qualified to judge whether Rowing portrays much about Hamilton accurately, it left me with an extra sense of place-specific myth and nostalgia that I'm happy to have encountered.