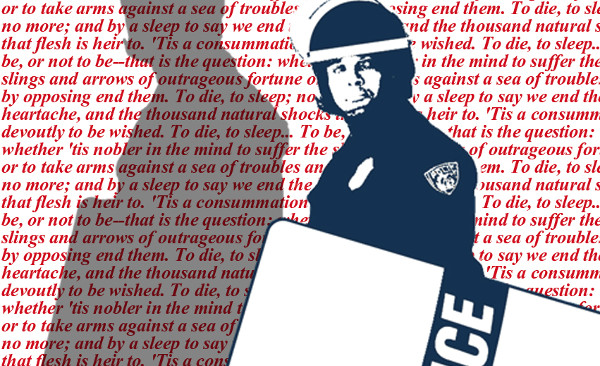 Full disclosure: I work in the same office building downtown Hamilton as the playwright Bryan Boodhoo and so I've been casually interviewing him in the elevator and trying to obtain some insights.

This play is essentially about a police officer (played by Carlos Jimenez) who has shot an unarmed person in some kind of physical confrontation. He's on leave from duty and is basically drunk all the time and occasionally plotting his own death. His relationship with his wife Lynda (played by Annalee Flint) is falling apart and he's seeing a therapist. And that's the good news!

This play thematically deals with the cop and his aftermath rather than the victim, which is more commonly what we see on TV. Bryan and I were discussing the inherent racism in all this. Clearly the police are being portrayed these days almost like white thugs who are hunting black people.

One of the things we seemed to agree on is how much more complicated this play would have been if the protagonist had been white rather than Hispanic. In that case, I would think that the audience would have far less sympathy for this character, so from that perspective I felt the ethnicity was strategic.

What I also found interesting in my discussion with Bryan were some of the choices they made in this production regarding the use of guns (will there be a suicide or some kind of accident?) and also the ending (should it be happy or sad? Should the wife run off with her husband's therapist?).

This review would not be complete without discussing our foibled therapist (played by Dan Sanderson) who has a few issues of his own and gets to say the funniest line I've heard at the Fringe so far.

He's on the phone talking to his daughter who he has not seen in a while and this becomes loud and clear once she tells him she is having a baby. He says, "I didn't even know you got married!" This is a really close family! His delivery perfectly portrayed how pathetic the situation was.