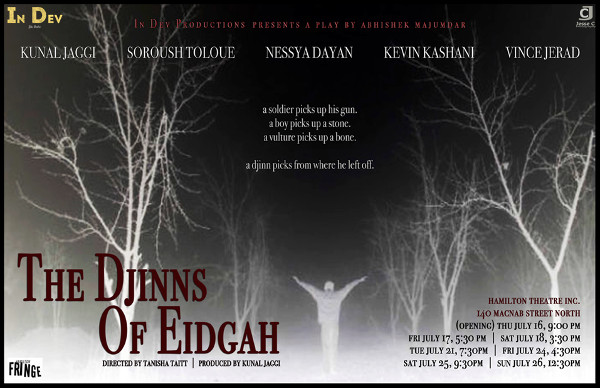 The Djinns of Eidgah is a jarring look at lives caught up in the everlasting conflict for control of Kashmir, a tiny Muslim-majority region between India and Pakistan that both countries have claimed since their formation after the British withdrawal in the late 1940s.

Kashmir has been relatively quiet lately, although both nuclear-armed countries' soldiers have recently exchanged gunfire.

While the use of foreign-sounding terms like those in the title may cause hesitance or confusion among English-speakers, many of the themes of the play are actually quite familiar.

Kunal Jaggi plays Bilal, a Kashimiri soccer player whose skills could be his ticket out of the warzone. Bilal wrestles with whether he should be openly opposing the occupation of his part of Kashimir by Indian troops, a cause embraced by other members of his soccer team including his friend Khaled (Vince Jerad).

All questions of political or moral conscience aside, the biggest and deadliest temptation for Bilal and other characters is the religious extremism propagated by the djinns of the title, spirits that can communicate with or possess human beings.

Amid the context of religion gone violent, driving events inexorably toward disaster, there are the pragmatists. Soroush Toloue shines as a very convincing Dr. Baig, a psychologist who's taken it upon himself to heal the wounds of Kashmir's young, and stop the well of anger that perpetuates cycles of violence.

Djinns succeeds in imagining an answer to the question of why some conflicts never end. It is a sorrowful depiction of the perils endured by young people subject to the actions of their elders. Prepare to be shocked, saddened, and, best of all, invested in this play.