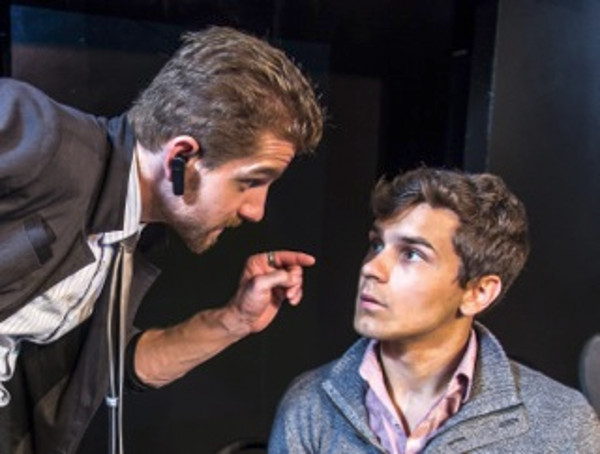 Sky Gilbert is known for tackling contentious issues head-on, and I sort of went into this show just assuming that it would be unpacking the gentrification debate currently under way in Hamilton. I was pleasantly surprised when it went in a completely different direction.

We open with Sanders Dillingham (Andrei Preda), a smarmy Toronto-based marketing douchebag sprawled at his desk, talking loudly into his bluetooth headset (of course) about being stuck in Hamilton to work on an ad campaign to promote the city.

A young intern, born and raised in Hamilton, will be joining him to work on the campaign, and Preda does a fantastic job establishing his character as both condescending to his subordinates and a suckup to his boss.

In comes Roy Stilts (Duncan Rowe), the intern, earnest and sensitive, literally vibrating with enthusiasm to, as he blurts out, "change the world!" He thinks our society has become too obsessed with stuff, and he wants to promote the human, authentic side of Hamilton and its people.

Sanders wants to know how the campaign will reach his imagined target demographic: the latte-sipping yuppie on Ossington Street. It is clear that he intends to humour Roy but keep control over the creative process, and the two players enjoy a lively chemistry as that dynamic unfolds far into the night in an increasingly zany brainstorming session.

It becomes clear that Sanders is not as shallow as he appears. He is hiding two secrets, one for professional reasons and the other, far more painfully, for deeply personal reasons.

The first secret comes out toward the end of the show in a truly delightful exchange that had both actors playing off each other in perfect balance. Rowe in particular does a fantastic job of turning the tables and exercising progressively more control over their dynamic.

The second secret is never really unpacked, in what feels like both a loose thread and a missed opportunity for character development. It also leads to a sudden, extreme tonal shift in the play that is really jarring - and not in a good way.

The line of questioning that triggers the reaction feels forced, and the reaction itself seems to come hurtling out of nowhere to blow up the mood in the room. With a few tweaks to the script and pacing, I think the actors could find their way to the same emotional climax along a more believable path.

But this is by no means a fatal flaw. The play does recover its momentum, and it closes on a very playful note that drew raving applause from the audience.

The actors embodied their characters with great comfort and similitude, the pacing was mostly excellent, and the dialogue was by turns sharp, funny and poignant. I can definitely recommend this show.