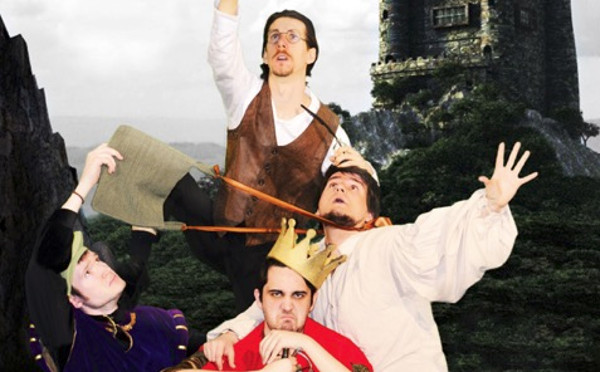 Scribe is an ambitious attempt to capture some of the magic of anachronistic comedies like Monty Python and the Holy Grail. Unfortunately, it is bogged down by an overcomplicated plot, too many momentum-killing scene changes, and perhaps twenty minutes of extraneous material.

For a comedy like Scribe to be successful, it has to carefully balance irony and absurdity with a more grounded story. While playwright Nolan Molfetta (also an actor and producer of this production) has created many witty jokes and sequences of dialogue, he shows his inexperience in the awkward handling of an inter-kingdom political conflict, and an apparent indecision as to what logical rules the world of his play is bound by.

If Molfetta eliminated some of the unnecessary conflict, cut a few of his Abbot and Costello "Who's on First" routines, and refocused on his hapless main character, the show would begin to hold together better.

There are some genuinely sweet and funny moments. James Andreadis is especially charming as Padre, the illiterate scribe, supplying the show with a genuine character to root for. Anton Wasowicz also does some good work as Charles, though his character lacks consistency.

An hour-long comedy is a deceptively difficult project to tackle, and Broken Bricks n'Sticks hasn't quite managed it. Still, with more experience, and a stronger editorial eye, the group has the potential, in future, to create clever, sweet comedy that will live up to the aspirations of Scribe.