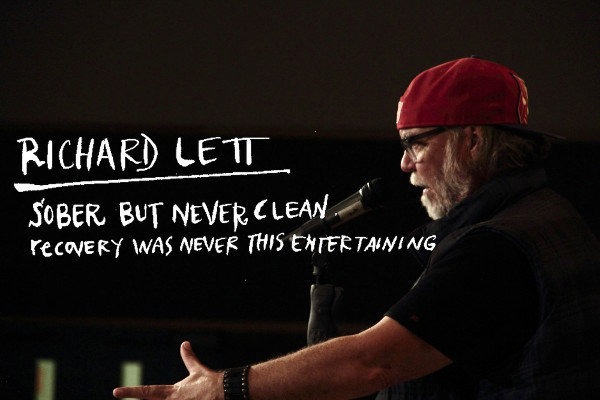 Richard Glen Lett of Camrose, Alberta, may describe himself as "legendary," but Sober but Never Clean, his 60-minute show premiering at this year's Hamilton Fringe Festival, offers far more contrition than bombast. And while the playbill describes him as "Canada's George Carlin," - he shares that late legend's scruffy white beard and grumpy rasp of a voice - Lett shows a disarmingly tender side that Carlin was never known for.

Lett's show leaps nimbly from caustic but vulnerable spoken word to meditative half-songs accompanied by himself on piano, to crass but reflective stand-up comedy. Speaking of stand-up, fans of the genre should definitely appreciate this performance, but the show pulls heartstrings as often as it provokes laughter.

Using these forms, Lett takes us from gigs in bars and clubs around B.C. and Alberta, pounding 40 shots per show and earning the title "most punched comedian in Canada," through recovery to the other side of addiction, gently telling off an elderly heckler in Vaughan. While far from a chronological narrative, there is a unifying theme here: learning to do what you love without the dubious crutches you never really needed.

Sober but Never Clean is only stronger for the contradictions it embraces. Unshaven, with a backwards red baseball cap, yellow-tinted shades, and a denim vest torn at the sleeves, Lett projects an edge. He swears, jokes about fights, and describes the aftermath of a gang shooting.

But when playing his gentle piano compositions, recounting childhood abuse, or struggling to understand a relationship that's leaving him unfulfilled, he shows an abundance of wisdom, warmth, and sadness.

This show's a good option for those who have struggled with addiction or recovery, know someone who has, or who just have trouble opening up without a drink in their hand. It's also a funny, fresh take on stand-up that transcends the genre.