Fringe 2015 Review: Transformation: A Journey of the Soul's Healing 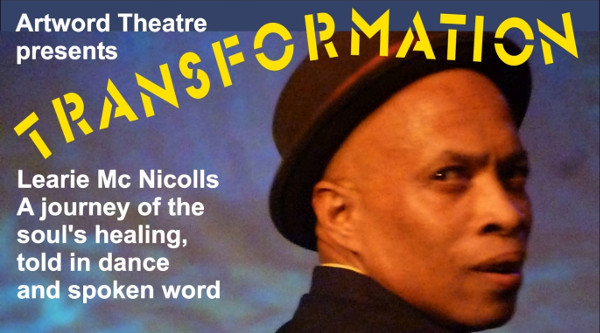 Transformation: A Journey of the Soul's Healing is a multi-disciplinary art piece that encompasses dance, spoken word, live music and image projections. Although initially conceived during 2014 performances, Transformation was first presented earlier this year and incorporates three of Mc Nicolls' poems in order to bring three distinct characters to life.

Although these characters have other interactions, Learie is able to portray every single character with ease, using his body and voice alone to capture the essence of each; from a small child passing by on a beach to a preacher as he comes to terms with a troubled childhood.

In this sense, the story itself is epic; intense emotions and opinions of family, poverty, war, love, fear, sacrifice and faith are carefully explored as the character gracefully transforms and weaves their way into and out of the changes in their life. Through it all, they continue walking forward, to face each sunrise, and the promise of a new day with unreserved enthusiasm for the promise it may hold.

Mc Nicolls' strong mastery of dance performance and movement is especially apparent as each transformation takes place with ease and grace that reflect his professional training.

No space or moment is wasted throughout the performance, as Artword Artbar is utilized perfectly in its entirety to capture each transformation, both in music, imagery and movement.

Mc Nicolls and his live collaborators have carefully and consciously thought out each moment, ensuring that they contribute to a powerful and meaningful performance as the music and images move the story forward as seamlessly as its main character.

Although many may feel that contemporary dance is an art form not for them, Learie Mc Nicolls is an apt tour guide for those looking to learn more about it as he conveys his story. This type of performance is reason enough to be excited about the future of the dance and art community in Hamilton.