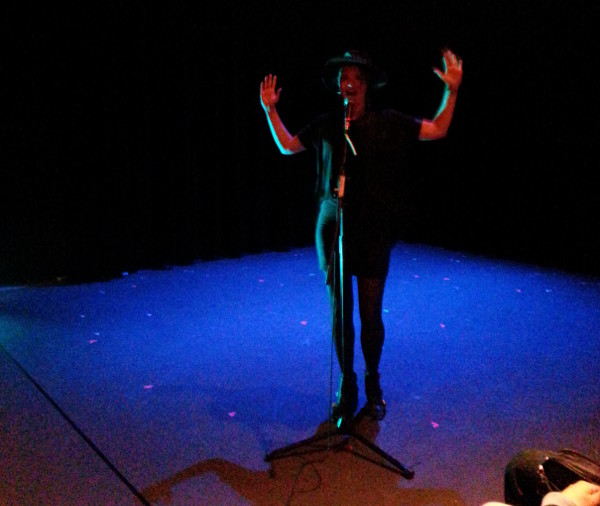 The program notes for 911 give away almost nothing about the play, but we went to see it based on the strength of Normal, last year's Fringe production by the same company (you can read our review).

The play is already in progress when the audience files into the house: Flo (Claire Burns), a coquettish young techno singer, is performing at her album release party. The song ends, she thanks her friends and supporters, pops a pill and promises to see everyone on the dance floor.

Cut to an empty stage, and a cell phone flies out of nowhere to hit the side of a car heading home. Enter Mick (Edward Charette), the driver, an anxious under-achiever who bursts out of the car in a rain of expletives, wanting to know who the you-know-what throws a cell phone at a car.

He calls on his sensitive roommate, Ari (G. Kyle Shields), to help him solve the mystery. They soon determine that the last call made on the cellphone was to 9-1-1, and they realize they have a bona fide mystery on their hands.

I don't want to give away what happens, because the play does such an amazing job of teasing out the story from a slender reed of initial facts, but we soon meet a mysterious photographer, Riley (Brandon Crone) and the angry, pensive Detective Maddox (Justin Goodhand).

The play runs long at 85 minutes but the pacing is exquisite. The interplay between the characters - especially Mick and Ari - is warm, natural and often laugh-out-loud hilarious. The scene transitions are smart and stylish, and the play makes excellent use of both darkness and a variety of light sources to build mood and tension.

Playwright and director Jakob Ehman is from Toronto but he sets the story in Hamilton and he has clearly done his homework. Several name-dropped local institutions elicited cheers and delight from the audience.

This is a must-see performance by a hugely talented company.

I loved this performance and was so impressed that they were able to lead the audience from gritty humour to sincere suspense. Agreed that this is a must see! My number one favourite of the 8 I've seen. Second is Prince Charming!