I managed to catch two plays on Saturday. I was hoping to see Bridezilla vs. The Apocalypse too, but it was sold out. (Spoiler alert: I finally saw the closing show on Sunday. You can read my review.)

As a full house shuffles into the theatre, a woman in a long grey coat lies curled up on a park bench on the stage, easily overlooked and easily forgotten about. 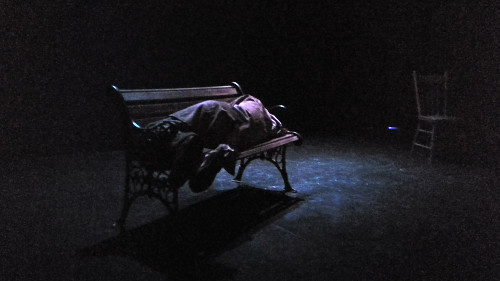 This enthralling one-person play begins with Myra Hennessey (played by Jennifer Cornish) rolling off the bench and waking with a start to find herself on the streets of Dublin, fighting a thick head from last night's drink. Everyone who lives rough on the street has a story, and over the course of one agonizing day spent trying to beg enough money to buy a bottle of booze, Myra tells us hers.

She was young once and beautiful and had a bright future ahead of her with the love of a romantic, feckless, Bob Dylan-quoting suitor, but the seeds of her devastation had already been planted. Hanging over her prospects was a mother killed too young in a tragic accident and a family predisposition to the alcoholism that had already claimed her father.

As he lay dying, his liver destroyed from a lifetime of abuse, Myra's father warned her about the Beast that stalked the Hennesseys, got its claws into them and eventually took them down. At his funeral, she made a promise to fight the beast - but life gets in the way.

Between the hardscrabble struggles of a poor family in Dublin, the trauma of Bloody Sunday in 1972, the wasting death from lung cancer of her friend Big Bridey (who was born with a Woodbine in her mouth and came down the birth canal when the doctor waved a pack of matches) and the worst tragedy that can befall a young mother, it all proved too much to bear and Myra let the Beast catch up with her.

The dreary material is leavened with Cornish's intense, lively performance and a smart script packed with spot-on characterizations, sharp insights and witty turns of phrase. This play ran an hour and a half but I can't think of anything I would have cut.

The direction by Darlene Spencer was polished, with excellent pacing, great use of space on a minimally decorated stage and an ultimate circularity that did not satisfy the conventions of a narrative arc but nevertheless felt just right.

Myra's Story is a beautiful, heartbreaking insight into how a life can fall apart.

After the despairing experience of Myra's Story I needed something to cheer me up, and Tom, Dick and Harry was the perfect cure. 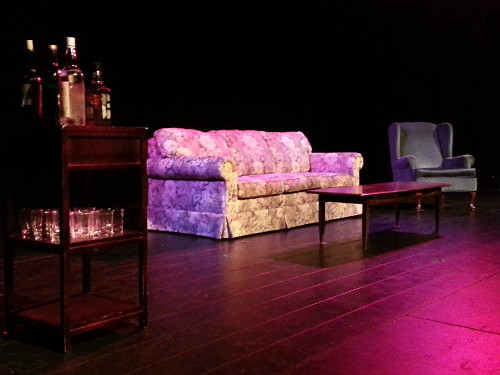 Set from Tom, Dick and Harry

Sally (played by Lisa Cohen) is a 35-year-old divorcee who has taken a young earnest lover, 22-year-old graduate student Tom (played by Anthony Rella). Naturally, they met at the video store, where they were both trying to rent The Graduate.

Sally's divorce was amicable, and her ex, Dick (played by Adrian Gorrissen) is on his way over with his new partner, Harry (played by Scott Garland) to make a bold proposal: they want to have a baby, and they hope she will agree to be the surrogate.

The play treats its material lightly and the actors have a delightful chemistry, playing off each other and sharing plenty of laugh-out-loud dialogue leavened with comfortable physicality. It raises some interesting questions about what a family needs to be integral but doesn't get weighed down by them.

Of course, every story built around sexual tension between more than two people eventually paints itself into a corner, and Tom, Dick and Harry hits that point with an abrupt tonal shift from which it doesn't entirely recover. However, the resolution plays smartly against type and the audience is left satisfied rather than cheated.

Director Byron McKim treats the play as a sitcom, skilfully employing the cuts and scene breaks we've come to expect from a genre that knows how to plumb humour out of awkwardness.

If you try to analyze this play too closely, you will get bogged down in the contrivances and confused motivations that hold it together. My advice is to sit back, relax, take Harry's advice and check your expectations at the door. It's a lot more enjoyable that way, and this play is made to be enjoyed.