It's July 20, 1814 and eight men are to be hanged, beheaded and quartered for high treason in Burlington Heights due to their American sympathies - but one prisoner has escaped and is on the lam. An hour before the hanging is scheduled, Doctor McLanahan’s Magical Elixir Travelling Medicine Show rolls into town to provide entertainment for - and sell Elixir to - the crowd gathering before the gallows. 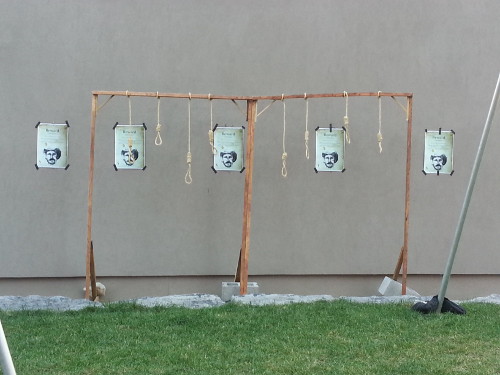 Set detail for The Hangman's Reprise

McLanahan, the funny, charismatic snake oil salesman, pulls down the familiar-looking Wanted Man posters posted nearby and has a tense exchange with the local Sheriff, who won't have some tonic peddler get in the way of the rough justice he is sworn to uphold.

We already have the makings of an engaging dramedy, but this cabaret production is put on by the Hamilton Aerial Group, and they make clever use of aerial silk and ring: not just to turn our eyes upwards for the sheer spectacle of gorgeous acrobatics but also to remind us of the bodies that will hang, suspended, in the air when the hour is over.

The two strains of this funny, haunting, perplexing and gratifying performance twine around each other like the ribbons of silk from which the aerial performers hang, slowly twisting their strong, supple bodies into gravity-defying shapes.

McLanahan's efforts to misdirect and befuddle the Sheriff include plying him with a drink he calls "The Bloody Assize", a noxious cocktail made from a caustic catalogue of political observations about the inherent hypocrisy of treason, a charge that lives entirely in the national eye of the indicter.

Meanwhile, we're treated to a drunken serenade by the Sheriff, a visit by Britannia and her entourage of frolicsome oversized puppets, and a somber reading from letters by the spouses of the doomed men, pleading for clemency.

The WTFs start to pile up as the play veers between circus pageantry, bawdy comedy, savvy political commentary and human tragedy, and the ending feels slightly rushed - but these are minor quibbles in a performance that delivers big laughs, astonishment, pathos, goofiness, breathtaking acrobatics and a generous serving of scathing social commentary.

The Hangman's Reprise was originally held in the Lyric Theatre, which has ceilings high enough for the 6.5 metre aerial rigs. After the Lyric sprung a leak in last Friday's storm, the play was moved to the parkette on King William Street next to the Lister Building.

We saw the 7:20 PM show and then went to dinner. On the way back, we passed the 9:20 PM show in progress and were impressed by how much moodier the stage was after nightfall, lit only by the stage lights that cast impressive shadows onto the wall of the adjacent building. 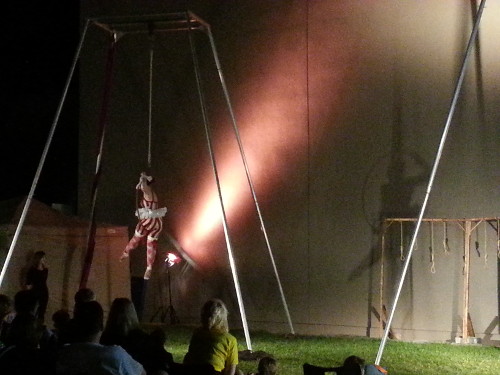 Aerial ring performance during the evening showing of The Hangman's Reprise

The last showing during Fringe is this Saturday night at 7:20 PM. I highly recommend seeing it, WTFs and all.