A Quick Fix for Main Street

I'm sure you've heard about the constant theme from the HiveX conference this past the weekend - walkable, complete streets. This isn't just a fad. It's reality for now and the future.

There is a growing sense of urgency among many of the HiveX generation that Hamilton needs to get on the ball now or risk losing the next generation as we have the past couple generations to other, more progressive cities.

Our current momentum is great, but hardly a guarantee of future success.

I wrote last week on RTH about making Cannon a complete street. The traffic data is in, and it can easily handle being a two-lane street 24-7 with a two-way bike path and tree/plants installed all along its length on the curb portion of the sidewalks.

What a difference this would make in the life of the city. Suddenly an ugly freeway is an enjoyable, green street that even contains much of its own stormwater run-off in the new bioswale style planters.

I have a meeting next week with a couple of engineers in the wastewater department about these bioswales on urban streets. I'm hopeful we'll see Hamilton move quickly on this.

This brings me to the point of this post: Main Street. The status quo simply isn't acceptable. I realize we're 'studying LRT' and keep using that as our excuse not to touch Main or King, but we need to come up with some simple solutions that can benefit the street until LRT actually happens.

Main is 50-60 feet and five lanes wide. Right now there is daytime curb parking on the north curb. The south curb has no parking until you get east of Wentworth.

On the north side, mark off the first five feet with planter boxes and use the next five feet for bike lanes, with a two foot buffer zone. 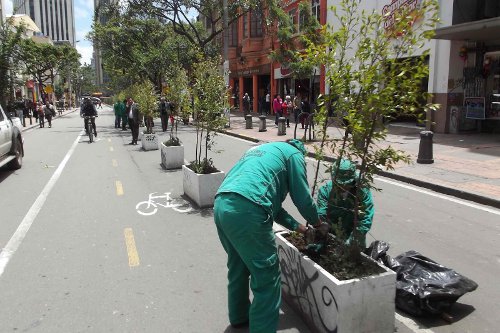 Alternately, these three components could be switched around so that the bike lanes are next to the curb and the planter boxes are between the bikes and car traffic.

The next thirty feet could accommodate three ten-foot travel lanes, with the last eight feet used for all-day curbside parking (except at bus stops).

At the same time, we can de-time the lights and add a few extra stoplights where needed.

This involves no reconstruction of curbs or sidewalks and still leaves three travel lanes, which is the maximum any city street should have in one direction.

East of Sherman, Main is reduced to four lanes so I would simply suggest we leave everything the same except have two traffic lanes instead of three.

We can't wait another decade. It's embarrassing to have people come visit Hamilton who haven't been here in 20 years and say, "wow, nothing has changed".

We know that walkable streets are good for everyone - business, residents, pedestrians, even drivers. They're better for safety and better for healthy living.

Down the road, perhaps we can make a permanent change to Main, but we can't wait until then.

Main and Cannon are the worst thoroughfares in Hamilton. If redeveloped in such a manner, they would go a long way toward enhacing the quality of life and business in our urban core neighbourhoods.

Please clarify, what is the "HiveX generation"?

the opening sentence has a clickable link that explains the reference.

I'm guessing it's a reference very loosely defined as "entrepreneurs in the 25-35 age range". give or take.

Thanks for posting this! I couldn't agree more. I truly think that Main St, particularly the stretch between the 403 and James needs to our next focus and proposing something 'temporary' that can be used as a 'trial' is probably the best way to gain traction right now.

If there was a continuous bike lane on king from Gore Park to the 403 bridge and another on Main from the 403 to gage park we would see an immediate improvement in the livability of our neighbourhoods.

The idea of separating the bikes from parked cars makes that simple idea 100 times better.

And to ease in, we could disallow parking from 730-9 and 4-530 until we see that there is ZERO effect on traffic and then we can remove all parking restrictions.

i also think this is a GREAT way to prove that the reduction in lanes WILL NOT create "gridlock" ....just like the construction on the 403 overpasses

I was just downtown in the international village and looking around this light went on. THE INTERNATIONAL VILLAGE IS TWO LANES!!! There is no gridlock! All you have to do is time how long people are waiting at Walnut v at Queen to test whether we have gridlock. I suspect the result would be that Walnut is below standards of congestion in every other city and Queen is way, way, way below it.

if anyone knows how to whip up cross-sections, and are bored stiff, feel free to post a rough image of how Main would look, facing east with:

5 foot bike lane, 5 foot space for tree planter boxes, 2 foot painted buffer zone, 3 ten foot lanes and an 8-foot curbside parking lane. Let's be honest, 3 lanes is still pretty ridiculous, but the bike lanes, trees, 24-7 parking and visual narrowing of the street would probably do wonders. And none of it involves permanent construction.

In my previous comment I meant to say that using the planters as a division was genius. I mean, it's functional, attractive, non permanent and more effective than those crappy jersey barriers

Agreed. It's an inspired compromise.

Not to introduce a raincloud to the picture, but does anyone have a ballpark idea of the cost of enough 5' concrete planter boxes to demarcate the 7km between Bay and Gage (seems like the easiest stretch to adapt)?

If you're going to suggest planter boxes, can you suggest that they use trees that are taller than the ones pictured? The ones that they are using in the picture cause two problems:

1) they block visibility. You can see the pedestrian having to step into the bike lane to see if a bike is coming.

2) when those trees start to grown their branches laterally, they are going to get in the way of the path.

The pic is from google images...it's in Bogota, Colombia. Just meant to show an example of planter boxes. Look at how tall the trees got on Mulberry's patio in those tiny little planters. With large planters we could see some good sized trees...and with the space available, they won't interfere with pedestrians or bikes. The more I think about it, the more sense it makes to have the trees next to the traffic lane, with the bike lane between the planters and the sidewalk. also, keep in mind, planters can't block driveways or parking entrances, which Main St is loaded with. These would mostly exist at corners and some mid-block sections that have no obstruction.

Brilliant idea Jason. Maybe we can somehow raise some money to assist ($$$ wil no doubt be a roadblock). He'll, I'd donate!!!!!

absolutely....see my new post below which shows exactly that from NYC.

Why are citizens like us coming up with these ideas and not city staff??

Found this info from NYC. A few points:

I am sure we really don't need Main Street at all just shut it down and be done with it.

Being able to curb vehicles to allow passage of emergency responders is a wild card that impacts lane subtraction, but in general, yes, it's overbuilt.

The challenge is mainly funding, IMHO. Council knows all the buzz theories more or less by heart, but they're basically broke.