I wrote a post the other day about a Leadnow.ca campaign promoting nation-wide demonstrations at the constituency offices of Conservative M.P.s to protest Bill C-38, the Harper government's omnibus budget bill that changes over 70 laws, eroding further our democracy, our labour laws, and our environmental safeguards, to name but three of its insidious contents. 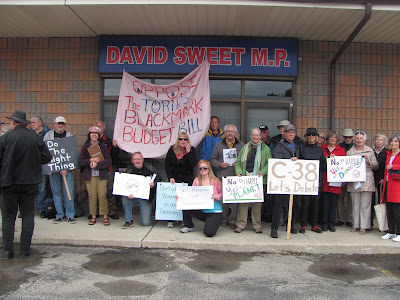 Locally, a group of us gathered at the office of David Sweet, Conservative MP for Ancaster-Dundas-Flamborough-Westdale. Although disappointed that he wasn't there (and in fairness to him, I checked afterwards and found out that his constituency hours are only Monday through Friday), it was nonetheless a healthy gathering of people, many of whom shared the view that this was just a first step in organizing local opposition to the agenda that Harper is mercilessly pursuing at the expense of the well-being of all Canadians.

None of us, being mature adults, are under any illusion that the fight will be easy or of short duration. We all know the power of the Conservative propaganda machine. Coupled with the fear that the regime inspires in various groups who still subscribe to the tenets of democracy, and the contemptibly divisive tactics employed by a government drunk with its own power, the road ahead is littered with obstacles.

But at least the process is in place. And while I recognize that it is very often very difficult for people to take that first step outside of their 'comfort zone' to join a protest, I suspect most would say that once they have taken that step, they look forward to more opportunities to do what they can to ensure that the great country they have known throughout their lives offers the same values and the same opportunities for their children and their children's children, down through the generations.

Lorne Warwick is a retired high school teacher who spends his time reading, traveling, doing crosswords, volunteering, and becoming increasingly concerned about the state of democracy in Canada.

Glad to see this type of thing happening - we need a lot more of it. What's happening on the Federal level right now is beyond terrifying...