Part of the Gowling's law firm parking lot at Main Street and James Street was cordoned off Sunday in preparation for the arrival of a large crane that will be used today to repair mortar at the very top of the 18-storey spire of St. Paul's Presbyterian Church at James Street South and Jackson Street. 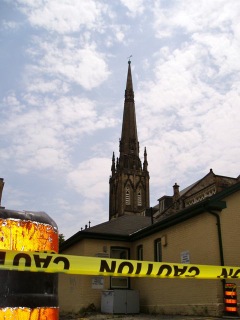 The church was erected in the mid-1850s and its spire is believed be the tallest in Canada that is made entirely of stone.

The bells of St. Paul's, installed in 1906, were silent for 18 months after pieces of mortar fell from the steeple. They resumed ringing last summer after an engineer pronounced the structure safe, and now the material that binds the stones will be fixed.

It's a reminder of the burden assumed by congregations such as St. Paul's, worshiping in heritage buildings that are challenging and costly to maintain. James Street Baptist Church, across Jackson from St. Paul's, is dealing now with ornamental stonework on its roof, broken in a winter storm.

When I moved to this city 40 years ago, stones from the pinnacle of St. Paul's spire, dislodged in a 1944 earthquake, stood on the lawn as a monument to the workers who built the building so well that it remained otherwise intact.

As far as I know, it was Hamilton's only visible reminder that earthquakes have done - and can do - damage to buildings in this region. The marker disappeared in the 1980s when the original stones were put back during a restoration project.

Here are links to two stories on the St. Paul's bells I wrote for the now-inactive OpenFile Hamilton website last year.

To help preserve St. Paul's as a landmark in downtown Hamilton, you can make a donation through the Canada Helps website.

Thanks for the update. Absolutely one of the finest churches I've seen anywhere. Let's keep it healthy.

I saw this on Saturday night when we went on the Haunted Hamilton (downtown) ghost walk. Thanks for the update, our host wasn't sure why part of the cemetery was blocked off.

Sidenote: I would recommend anyone interested in downtown's history go on it. It was about 1.5 hours and well worth it. Looking forward to going on their walk regarding gangsters and bootlegging.

Thanks for this, just a few minutes ago I was standing in front of St. Paul's waiting for a bus wondering about the string of caution tape.

The church's neo-gothic interior is one of the most beautiful sanctuaries in Hamilton. Worth checking out at the next Doors Open Hamilton or a Sunday morning.