The Heritage Canada Foundation has just published an essay on the old Revenue Canada building in its magazine on Endangered Places [PDF].

Although the latest draft plan for the redevelopment of the former Federal/Revenue Canada Building in downtown Hamilton no longer calls for its total demolition, only part of the west façade will be kept intact in order to preserve the bas-relief sculptures by artist Elizabeth Holbrook. The remainder of the structurally sound 1950s federal heritage building, however, will be razed.

The report notes that the building at 150 Main Street West was "given 'Recognized' heritage status by the Federal Heritage Buildings Review Office in 1993" and was identified in the 2006 Hamilton Residential Intensification Study as a good candidate for adaptive reuse as a condominium.

When Vrancor bought the building in 2004, Darko Vranich signed a covenant with th Federal Government to protect the building's heritage features and "ensure the building is in good and sound state of repair as a prudent owner would keep it." Instead, the developer left the building vacant and derelict for years, at one point illegally using it to store hotel mattresses and propane tanks.

Last week, without announcement, Vrancor began demolishing the building, though the plan now is to preserve the southwest end. The remaining structure will be incorporated into a new condo planned for a future phase of a multi-year investment in the area. 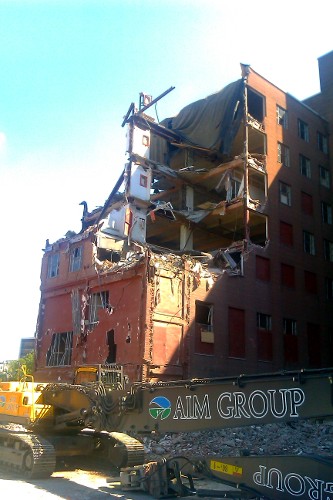 The first phase is a hotel planned for the property at the northwest corner of George and Caroline Streets. It is unclear how long the old Revenue Canada Building will remain partially demolished before Vrancor proceeds with its condo plans.

You know, there's a famine in Somalia, and you're wasting your time trolling on a local affairs/urban planning website? FOR SHAME!

Maybe you should start your own website. www.anonymoustrollingmakesmefeelbetteraboutmyself.ca is available!

Oh. And good luck to you.

Right. You wouldn't feel the constant need to put other people down with personal insults if you had anything to feel good about. You're not smart or clever enough to garner respect, and you spend way too much time resenting those who are. That's pretty obvious, regardless of pseudonym. Trolling this site anonymously every day of your life is the best you can do, and that's really pathetic.

So when do we find out what this new building is going to look like?

I saw a miniature version of our Federal Building in Little Current, ON this summer. It was a two floor red brick building with stone entrances not unlike our larger version. It housed a post office on the first floor from what I could see. Besides its apparent functionality as a post office, it accented the historic street wall as well as the majestic views of Lake Huron in the backdrop. Here is to hoping that Vranich will save some part of this uniquely beautiful building.

If Vranich makes good, and I'm not saying he's going to at this point. This will be a jewel for Hamilton and an adaptive reuse that I have no problem with. I would hope more of the people of this site would feel the same if it does happen.

A quick commercial search on mls, showed several of Vrancor's holdings in Hess Village are for sale, including the RokBar. What do you think this means?