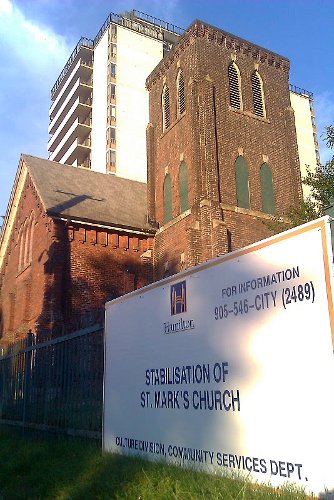 City workers have already cleared the overgrown vegetation around the building and will be completing the roof and gutter work in July. At the end of the month, the City will issue a public tender call for the rest of the work.

Anna Bradford, the culture division director, explained in an email that the work will entail:

B. Demolition (by dismantling) of the Sunday School, with a new gravel car park in its place.

C. Exterior brick masonry restoration to the buttresses and bottom 3 feet of the church perimeter.

E. Interior clean up of the church.

The Church was built in 1878, and the Sunday School was added in 1925. The City bought the property in July 1994 for $425,000 and subsequently designated the building and its adjacent open space under Part IV of the Ontario Heritage Act in 1995.

The building has been derelict and in limbo ever since, as the City has considered how best to use it. A Site Potential [PDF] report commissioned in February 2004 lists six options for the property:

There was no action on the building until October 2008, when the Economic Development and Planning Committee directed staff to determine possible uses for the site.

A June 2010 city report [PDF] recommended that Culture Division staff consider the feasibility of the St. Mark's building as a "cultural programming space to be administered by Whitehern Historic House and Garden staff".

It estimates a $350,000 price to demolish the Sunday School, but notes that the DePasquale Family Foundation and Copper Cliff Mills and Wrecking Corporation offered $80,000 in in-kind donations toward the demolition.

The work currently being conducted on the building is the first capital expenditure on the property since the city braced the west wall in 1995.

This building has long piqued my interest; it's always seemed like a gem-in-waiting.

Thank God it's not going to become a condo development...or a parking lot. (Yes, I'm praying...)

So glad this little building is being properly preserved. Its little garden is very nice in an area short on parkland.

Hey Ryan - I think it should say Copper Cliff. ;-)

This is such spectacular news. The Durand Neighbourhood Association has fought for this for twenty years!

Many years ago (1998ish) the city chose to give away this property to a worthy civic organization. I felt that there would be an awesome match for the Player's Guild of Hamilton (North America's oldest community theatre group). At the time we were in the throws of renovating The Staircase. So I gathered up our architect (Brian McKibbon) and our contractor at the time and set about putting in a proposal for the Player's Guild to renovate the space into a 150 to 200 seat theatre. Hamilton still lacks a mid range theatre venue, things jump precipitously from under 100 seats to well over 300. We had the micro theatre (67 seats), and there were lots of 400 seaters.

I filled out all the forms once it was indicated by a board member of the Guild that they would consider it. Our contractor and architect kindly donated their time. Our work was even based on the sale of some of the Guild's surplus rental buildings. So the presentation (as I recall) was financially, architecturally and structurally sound.

Unfortunately a board member made an executive decision and did not submit the application for a free building. The building went to an less capable group devoted to street youth and unfortunately nothing ever came of that.

Sometimes you can bust a nut for urban renewal when everyone seems to be doing stuff right (St. Marks not selling to a developer, city giving building away), and it just does not happen.

Sad to hear that the building is structurally threatened. I have been through the lovely space in detail, it still would be a great civic hall, gymnasium, auditorium or theatre. Parking is not an issue as city hall parking is ample and available in the evenings.