I had a chance to visit the newly-renovated and -reopened Hamilton Farmers' Market today, and I was impressed. Clean lines, plenty of light, and a nice contrast between the white, spare backdrop of a restaurant kitchen and the garish colour of the various stalls.

Among the changes: central Library overlooks the Market through glass walls, the escalators have been replaced with a wide staircase, and the Birks Clock overhangs the whole space.

Here are a few photos to give you a sense of what to expect: 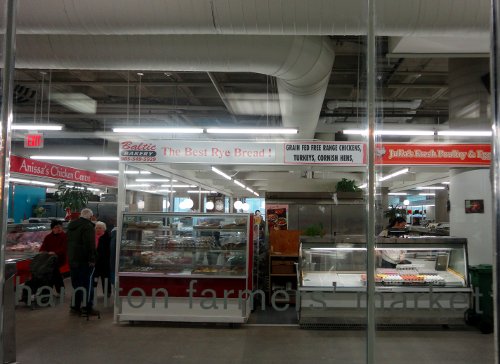 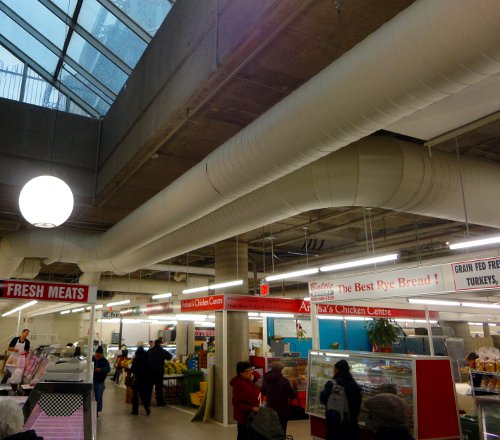 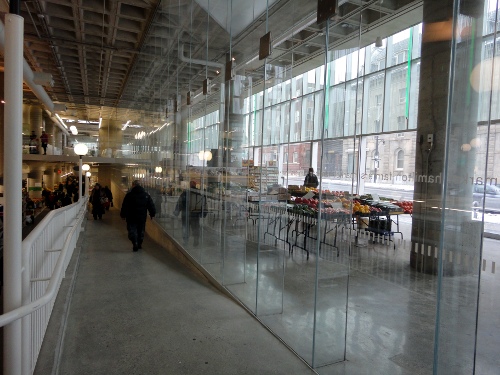 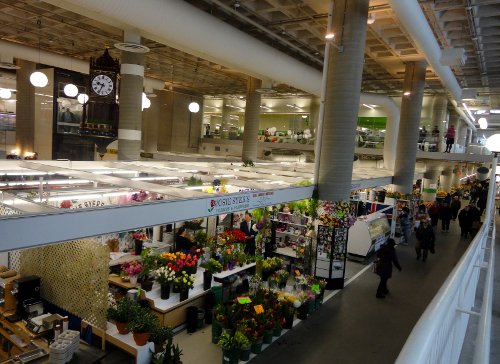 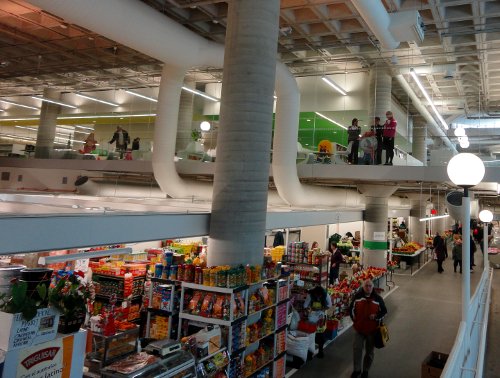 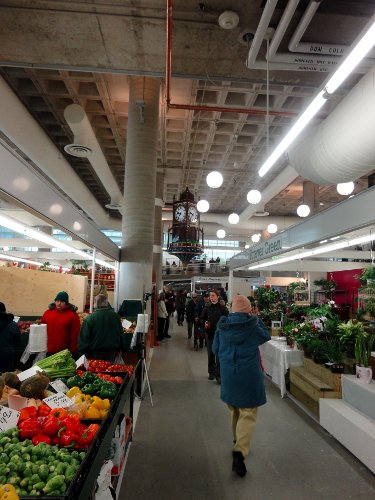 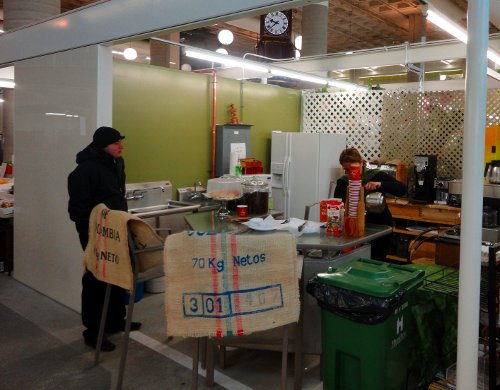 Thanks so much Ryan! I have been very excited about the opening but since I work out of town I couldn't make it today...looking forward to seeing it on the weekend and picking up some coffee, cheese and other items. The Spec was reporting some issues with hydro for some stallholders; did anyone notice if this was major deal or were many of the vendors open for business?

I bought some chicken and veggies (soup for the storm) and I enjoyed the changes. The Birks clock is impressive. I am happy it has a home.

I always enjoyed the international flavour of the market. While I'm not sad to see some of the "food terminal" resellers go, I am sad to hear that some of the more "ethnic" vendors were refused a spot in the new market.

Here's hoping that Jackson Square does something about "extending the market" out into their mall. After all, the extra traffic and filled storefronts can't be a bad thing, even if they do have to offer a significant break in the rent.

I rushed through on my way to work taking in as much as I could (snapped a few shots of the clock with my phone). As someone who was practically raised on food from the Farmers Market I really appreciate the reno. I know it hasn't gone perfectly smoothly but congratulations to all involved. It's still the market I grew up with but it's much brighter and more welcoming. The Birks Clock looks amazing, I can't even remember the last time I saw those knights charging.

I find the removal of the escalators rather coldhearted for all the people who will struggle to get up the stairs or the ramp. I find it hard to believe that they could not have been incorporated in the new design. In this day and age where access for all is more and more a concern it is too bad that the city took a big step backwards.

Yesterday, while busier than a normal Tuesday, was not a real measure of how the redesign will fare under peak strain. I'm young and spry, but even I found the corridors a little tighter than before. I'm not sure how the ramp measures up, but it feels a bit snug. Maybe that'ss just a faulty first impression, but it was also one made with many of the stalls barely decorated. (The market office, however, seemed larger and more spartan than ever, a fishtank aesthetic that had me expecting Anna Bradford to pull a David Blaine.) If more eye candy accretes over time, it might be like passing through the bowels of a pinata. I'm happy to wait and see, but my first impression was on the cool side of lukewarm.

As for the accessibility issue, there were very few if any wheelchair/walker/scooter/baby carriage customers out while I was there, so I was unable to gauge what sort of backlog the elevator will create, but I'd guess that you'll have lineups on both ends; as opposed to the fluid one-way service and large capacity of the escalator, we've got two-way service with a reduced passenger capacity. My guess is that this will be a point of friction, but again I'll play wait-and-see.

PS: Is the Birks clock fully functional? I had been in the library on the hour a couple of times since it was installed and was unable to detect charging or chimes.

For accessibility there's a gentle grade ramp that runs from the upper level to the lower level, I saw some people in scooters yesterday afternoon, they seemed to be doing OK.

There's that, yes. And in the absence of planters, benches and vendors on the ramp, it should allow for more fluid crowd flow.

There is an elevator.

Those massive pipes are a bit intimidating.

sbwoodside said, "Those massive pipes are a bit intimidating."

That's what she said.

Great article, but what does this have to do with the stadium? LOL

I really like the market but it should be in the West Harbour!!

I went to the market at lunch and also found it really... tight. The ramp especially has been made a fair bit smaller due to the increased vendor space up to the sidewalk. There were actually two people stopped on the ramp talking about how tight it was, somewhat holding up people in the process. In usual Hamilton fashion, an old guy pushed past me mumbling "so don't stop there, morons". I didn't mind waiting, even though I had to be back to work in a few minutes.

Anyway on the whole I was a bit underwhelmed by the experience. I guess I expected more somehow. The community kitchen is a lot less impressive than I thought. I figured it would be right out in the open space. Instead it's hidden under the stairwell, kinda like a cave. Not very inviting.

The common space/mini-food court under the Birks clock is really great though. I can't wait to have a meal there.

For sake of comparison, anyone care to replicate this perspective tomorrow?

Also, here's an event itinerary for next weekend's big launch.

Should be interesting to see the Market populated after 6pm, which seems like an historic first, though probably not in the 173-year sense.

According to that photo, they changed things pretty drastically. The clock is on the other side of that pillar, and that common area with the seats is also on the other side. I guess they realized that they didn't have that much room to work with.

I love the huge Lawren Harris painting under the stairs! The market, as it is now, definitely under-represents the Group of Seven.

From what I heard folks on scooters were having trouble getting down some of the aisles yesterday.

And did anyone else hear about the fire alarm incident? I heard yesterday that some stall's cooking set it off and dropped "a big garage door" that sealed off the mall entrance. Didn't see it myself, but it sounded very dramatic.

Just as we were about to head into the market, these big grey doors came down Indian Jones style. We stood around in the hallway for about 10 minutes and then left. It was kind of strange because I had seen people inside who were not evacuating in our direction. That must have been the fire alarm, and bad timing on my part!

P.S. Two vendors (bakery and Dilly's) are now set up in that area just inside from the market -- not sure if they will observe market hours or what.

Looks more like a mall than a market to me.

A market should be in an open lot with trucks backed up to the aisles and produce spread out accross a piece of plywood propped up on cement blocks.

Come visit the hearty stalwarts at Ottawa St. Last week there were three vendors: The Shearleas with root veggies/cabbage, the apple vendor (bless them, but I have no idea what their farm/bus. is called), and one other. It's not for the faint of heart in this weather, but it is for people who really want to go down the 'seasonal food' route. In the summer, it's an amazing place.

Ottawa St is the place for you.

I wonder if anyone would sell a miniature replica of the Birk's clock and how much would it cost? Here's another question, what are the plans for the pace that housed the temporary Farmer's market. I would love to see the Jackson Square LCBO move here and vastly expand in size as a result.

There's no plans for the temporary space. It's just vacant again.

I got to enjoy the Birks clock today at lunch, with charging horses and everything. It's really nice to see that they restored it so faithfully. The little metal horses going around the clock is awesome, they even take each other out with the jousting poles. I love it. I really hope they don't let it fall into disrepair again. It should have done that in front of Jackson Square too.

I think it did function for a time (with jousting and all) in front of JS. Familiar complaint: No will/budget to maintain an historical property.

This was never an inside clock until now, so it should be okay for a few decades.

I still remember watching them take the clock down from its historic perch at King and James. It was in rough shape, and I remember the distinct worry I wouldn't see it again. Really glad they brought it back.

Am I the only one who thinks that restoring something like that would be one of the coolest jobs in the world?

Was at the new market for the first time yesterday. I noticed yes the aisles are a little narrower but no worse than the St Lawrence Market and if you've been there on a Saturday you know what I mean. It would definitely be a great idea to lease some of the old food court area in the mall to addtional vendors. More choice is not a bad thing.

Took my daughter there today, its pretty tight with a stroller, particularly in aisles where people are lined up more then one deep.

Overall its nice, but to be honest I liked the old temporary space just as much. Farmers Markets are meant to be a little bit on the grungy side, its part of the appeal.

Went to the Market this morning with my wife and daughter...great vibe, it was pretty bustling...and yeah, somewhat tight, but like the previous posts said, no worse than St. Lawrence Market...I loved it and it's only going to get better...esp. in the warmer weather when it opens onto the street...

Forgive the shameless plug for Hamilton HIStory + HERitage, but you might be interested in listening to a podcast I did with the City of Hamilton's Senior Conservator, Therese Charbonneau about the restoration of the Birk's Clock. I think the clock's history is pretty interesting.