Sewer Work on James This Weekend

The City's Public Works department has issued a news release reporting that sewer work will restrict traffic on James Street this weekend.

Starting at 9:00 AM on Friday and finishing on Sunday, crews will work around the clock to rehabilitate the James Street sewers between Hunter and Main, Rebecca and Cannon, and Young and Beckley. 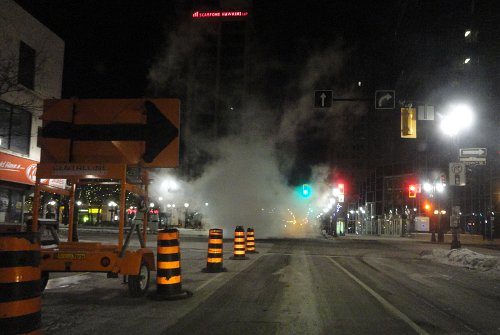 Steamy sewer work at King and James late at night on Friday, January 21

This being Hamilton, the news release reassures drivers that "traffic flow will be maintained", but the centre lanes will be out of commission and motorists should expect delays.

Well, it is work isolated to the middle of the road – shouldn't be especially shocking that they're addressing motorists. If they were tearing into curbside lanes or sidewalks one would anticipate that their press release would speak to cyclists and pedestrians.