Thanks to Graham Crawford for another excellent financial analysis of the latest stadium news. Hope you don't mind if I add some more questions raised by the document:

A) The Hamilton Tiger-Cats will "pay" $10 million, but up to $2 million of that will not be used towards the construction cost of the stadium - so where is it going?

B) The Ticats' payment is spread out over 10 years. There is a possibility that the team could go belly-up during that period, or go into hard times, and not be able to make the payments. We would be on the hook for the remainder. It's much easier for companies to do this than individuals. So that idea that they are "investing" $8 million is false. It's not an investment - it's a promise to pay $800,000 a year for 10 years - that's all.

D) Putting aside net present value for the moment: assuming the Ticats make their promised payments, take the city's $300,000 payment to them out of that, you get $500,000 contribution per year (total $5 million) from the team.

E) Now put in the net present value again, and you are down to their "promise" being worth less than $4 million. That's 50% less than they made it sound!

F) Why is the city paying all of the turf replacement costs? $200,000 a year has been allocated for this by the city, but it doesn't seem to be included in the city's top line contribution figures.

G) The city is putting in another $750,000 per year transferred from Ivor Wynne. They say this is to cover the construction costs. So is this money included in the top-line figure for the city's investment or not?

H) How much are the estimated parking revenues? We aren't given a figure for that, but it must be significant, and it all goes to the cats.

I) If we are paying $300,000 a year for operating the stadium, why are we giving up all of the naming rights? I agree that the city should at minimum get a percentage of the naming rights revenue, estimated at $3 to $3.5 million every year - a total of $60 to $70 million dollars over 20 years. That would help close the funding gap.

J) Why do we see the tiger cats yearly contributions tallied up into a big headline number but not the city's? If we use the same formula, the city has just added an additional contribution of $25 million dollars - $1.25 million per year for 20 years.

In this MOU the Ticats promise $8 million. But they get back $60 million, which easily eclipses that. On the other hand, the city promises $25 million more, and gets back nothing.

Although some say they find my style a bit pointed, you've proven no matter who does the math, it stinks for the taxpayers of Hamilton. Hopefully Council will agree with both of us.

To be fair, you can't discount the ticats' "10 million over 10 years" based on lost interest and NOT do the same for the city's contribution of 1.25 million per year for 20 years and the naming rights at 3-3.5 per year.

But even if you do discount all of the number equally, the results are sickeningly in favour of the ticats who bring only marginal benefits to the city as a whole.

Meanwhile we can't process all of our sewage during rainstorms, so it overflows into peoples' basements (and Lake Ontario).

Who exactly is steering this ship of fools? 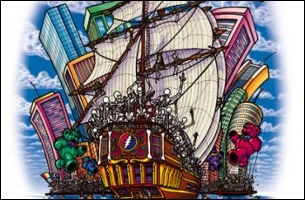 I'd take a lifetime of rent free living even if I have zero percent ownership. Wouldn't you?

I have an idea, let's let the Ti-Cats contribute 100% of the funding and give them 100% of the ownership. That sounds like a fair deal all around, wouldn't you say?

(by the way, my point is that you can't distill the "fairness" of the stadium deal down to ownership alone)

That present value for the 10 million was what I was thinking about on the weekend. Thanks for figuring it out for me so I didn't have to do the math... The TC are the ones emphasizing that they're giving 10 million dollars, that's a lot different than saying 1 million a year for 10 years. As far as a raw deal goes, this one's a duzy! Nix it please!!

They did the same thing in their rediculous economic benefits study.

With a 20 year deal, I hop the city has a provision to get a reasonable share of rent/profit based on the possiblity of significant profits ala current numbers that the Roughriders make, or even the prospect of better numbers.

With a 20 year deal, I hope the city has a provision to get a reasonable share of rent/profit based on the possiblity of significant profits ala current numbers that the Roughriders make, or even the prospect of better numbers.

This article at least is civil. Some good questions but its done without demonizing anyone. Good job. Too bad Graham didn't take the same approach

Thanks everyone for the positive feedback.

@realitycheck the tiger cats definitely have ownership in the stadium, since they are guaranteed full access, and the right to manage it, for 20 years. For those amazing rights, they are paying maybe 3% of the cost.

The Tiger-Cats could lose $70 million over 20 years if they run the stadium, but the team is willing to take on those costs, Ticat president Scott Mitchell told council this afternoon.

The article doesn't explain well, but it does note that the expected annual operating cost of the stadium is $2.8 to $3.5 million. $3.5 million over 20 years is $70 million.

This figure is incorrect for many reasons. First, the city is paying $300,000 of that cost per year. Second, the tiger cats commitment is only for 10 years, so their actual maximum loss is $32 million. Third, if they were in fact doing so poorly, it's certain that they would dramatically scale back their operating budget to reduce losses.

Finally it seems again to be nearly impossible for them to lose money, since they get all of the parking revenue, all of the advertising revenue, and all of the naming revenue, which alone is estimated to bring in enough to cover all the operating costs each year, even without the city contribution.

I'd like to see a proper analysis of the operating budget of the stadium, but I don't think we've seen it yet.

Turbo said ; " This article at least is civil. Some good questions but its done without demonizing anyone. Good job. Too bad Graham didn't take the same approach"

Sorry to say this BUT ... If graham's article was uncivil then Bob Young's behavior has bordered on criminal. He has tried to co-opt a pool of money set aside for city building and repurpose it for franchise building ...

I agree that this is nonsense, but it's unfortunate that so many councillors still refer to what's going on as 'moving forward'. I couldn't count how many times I heard that phrase yesterday. It's as if anything is considered moving forward, even yesterday's vote that essentially did nothing. I'm less concerned about moving forward, and more about the direction the vehicle is pointing in.