Trying to get people to come downtown is a conceptual error. It leads to foolishness like the idea that what downtown needs is broader one-way streets or more parking. It conceives of the city as a kind of theme park for suburbanites to visit and 'experience'.

It also runs up against physics. The only way to make room for more lanes and more parking is to take out actual destinations - and without destinations, there's no point in going downtown no matter how easy it is to do so. 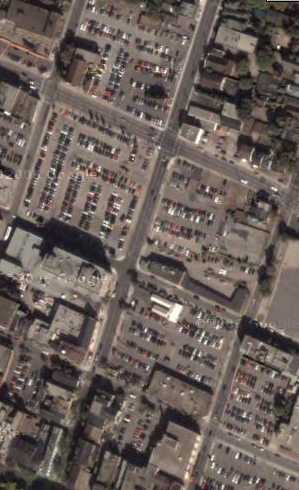 Lots of parking, but no destinations (RTH file photo)

The right approach - the successful approach - is to cultivate an environment in which people want to be in the first place. If downtown is lively enough, visitors will find their own way in.

The squelchers gnashed their teeth and tore at their hair shirts when Toronto rolled out the landmark King-Spadina plan, asking how on earth people would get there with no parking requirements and lane capacity sacrificed for a streetcar line.

These days, visitors are happy to make their way there to enjoy all the livelihood that burst forth once the city stopped smothering it with car-friendly rules.

We have enough parking and lanes for traffic, I'll agree on that.

Kiely, it's not that we don't want to attract visitors, it's that the best way to attract people is to make a place liveable for the people who are already there. When a place is a great place to be, people will come no matter how difficult or inconvenient it is to get there. Trying to attract visitors by making it easy for them to get there has the opposite affect. Stop trying to make it easy, and instead focus on making it great. Not only will the 'visitors' come, but they won't be visitors anymore - they'll want to stay.

Or, what Ryan said. You'd think I'd know by now.

My point is that if our focus is on attracting visitors, we're going to be doing the wrong things for the wrong reasons. If we focus instead on cultivating a healthy city in which lots of people can actually live and work, the visitors will find their own reasons and ways to come downtown. - Ryan

Kiely, it's not that we don't want to attract visitors, it's that the best way to attract people is to make a place liveable for the people who are already there. When a place is a great place to be, people will come no matter how difficult or inconvenient it is to get there. Trying to attract visitors by making it easy for them to get there has the opposite affect. Stop trying to make it easy, and instead focus on making it great. Not only will the 'visitors' come, but they won't be visitors anymore - they'll want to stay. - Highwater

re: the caption on the picture "lots of parking no destinations":

Sure there are destinations... the problem is they're the 9-5 type of destination.

Personally i have no problem with attracting people to the core. I also am on board with making downtown livable. If you don't attract the people to the core they can't see how livable it is. So why can't a balance of both be done? Summary: build a livable environment that attracts people.

I guess you could count the little hut where you pay the parking attendent as a "destination"...

I think Disney World is a perfect example.

Do you think it's easy to get on any of the rides? Yet people still line up for hours just to go on them.

But won't this put undue pressure on the working poor trying to make a living in our north end? Where's grassroots?

Will two way streets or subsidized LRT inspire downtown residents to become more creative and design products that people want to buy? Or, will it make them even more reliant on government handouts? I venture to say the latter.

Ryan has told us that people respond to incentives. Give them free goods and services and most will take them. However, by creating a system whereby people can get stuff for free, it also creates dependency, much like drug or alcohol addiction. For some people, the lure of living off the government is too difficult to resist.

I would argue that many of the downtown residents are these kinds of people. They are not useless members of society, they are just biologically efficient. If you make life easy for these types of people, it doesn't help them, it weakens them. Without enough stress, these people are like bone or muscle without exercise, they weaken and lose capacity to function over time.

However, if these same people are forced to take care of themselves, pay for more (or all) of their own health, education, food and shelter, they will do just that. For these people, the loving hand of the welfare state is like poison. It destroys their natural inclination to be creative and produce wealth that society can benefit from and replaces it with frustration, boredom and likely crime.

To not see that free stuff can be destructive is to disregard how human beings evolved, by solving challenges and expending energy. Don't let people starve to death, or die from illness, but also don't make it easy to get free stuff. Make it difficult to get free stuff and less people will do so, instead more people will be forced to tap into their own human potential. That is the way to make the downtown a better place, don't fight nature.

What, is it all the way up to $2.50 an hour now?? I think I paid that same rate in Tillsonburg once.

I'm often curious, given that Downtown Hamilton proper is Queen to Wellington, Hunter to Cannon, about how many readers currently live and/or work downtown (ie. Central/Beasley) -- and how many in Durand, Kirkendall, Westdale?

I'm inside the downtown proper.

According to a couple recent Spec letters, free parking is the only incentive to go downtown. Also, the market is near impossible to get to. Who knew?

I live and work in Westdale and do most of my trips around the West end or to downtown or Dundas by bike. I haven't taken the bus in years and years: it's just too expensive compared to either my bike or my gas-guzzling truck.

Places become destinations not because of geography, but because of the people who live and work there. - A smith

I agree with this part of your post A smith.

Westdale here, and travel by bike unless I'm taking the kids somewhere... but yeah, when travelling as a family I drive.

^Ditto, but with slightly less cycling. I drive too much. Does guilt count as a carbon offset?

I work in downtown proper, but I live in the North End and walk to work or take the bus (funny, the Bayfront buses are not usually air conditioned, but the West Hamilton ones always are!!!) I am terrified to cycle downtown, sorry to say. And I LOVE being on my bike.

And so, if success results from designing communities for their residents, I ask again: Why destroy an attractive, developing, downtown residential district by installing in its centre a commercial stadium that would attract, if successful, tens of thousands of people along otherwise quiet, narrow, residential streets, especially when there are more suitable commercial locations proximate to the city core nearby?

I am terrified to cycle downtown

Is it practical for you to ride on James North? Car traffic is slow enough that a reasonably fit cyclist can easily keep up.

z jones is right about James North: it's really quite bikeable now and has made downtown feel much more bikeable to me altogether. King is good West of Bay. And the little residential side streets North of KIng are great, too, even if all the stop signs are a bit wearying.

Read all the articles. I commute by Cycle everyday all weather...well almost but walked "carefully" yesterday(?) poured rain carrying umbrella not a great invention as should be...
As for inviting visitors we need smoke free, rid pan handlers...yes far too many smokers yet far too much traffic too poluting air and ruining roads so I agree we need parking fees especially for drivers who live here NOT visitors BUT i CYCLE to TO when i can because I'm used to it. I'm NOT used to the poor road conditions and drivers are the main cause of it. I haven't been to James North for while when Art Crawl is on and I'm an artist. I heard it's car/traffic free so I guess I missed this month.
Trick really to NOT rely on paid parking is to get/convince local/visitors to $pend and retailer$ to keep price$ down!
As for those timid cyclists, i cycle in 'style' since mid 80s. drivers see me and I have eye to eye contact and some of U may know who I am but this isn't about me...
I don't need be Anonymous but it's just fun!....

Just grab one of my cards on Aberdeen.....