Some 350 people met on Saturday, October 24, 2009 at Gore Park and marched to the Federal building at Bay and Market Streets to help send a message to the Canadian government about the importance of climate change.

Hamilton's march was one of over 5,200 events across 181 countries to celebrate the 350.org International Day of Climate Action.

350.org is the brainchild of American environmental activist Bill McKibben, who wanted to draw public and political attention to the scientific evidence that the world must commit to reducing the concentration of atmospheric carbon dioxide to 350 parts per million to avoid catastrophic runaway global warming.

Right now, CO2 concentration is nearly 390 ppm, a level higher than at any time in human history.

World leaders are meeting in Copenhagen this December to negotiate a follow-up treaty to the Kyoto Agreement. The 350 campaign hopes to persuade our political leaders to commit to a meaningful goal that is actually supported by the scientific evidence.

After live music at Gore Park and workshops around the downtown core, hundreds of Hamiltonians congregated back at Gore at around 3:00 PM and prepared for a march over to the Federal building at Bay and Market Streets. 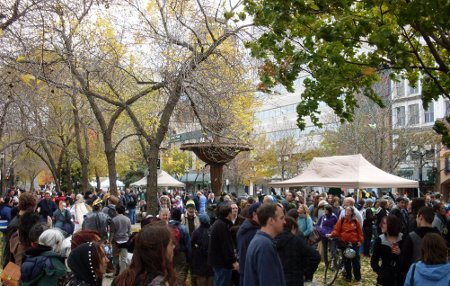 The festivities and planned march coincided with the Hamilton Zombie Walk, a fundraiser to collect non-perishable goods for Hamilton Food Share, and several zombies ended up joining the 350 march. 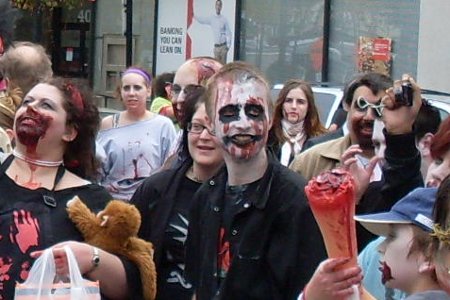 Shortly after 3:00 PM, the march toward the Federal building began, buoyed by supportive honks from passing motorists. 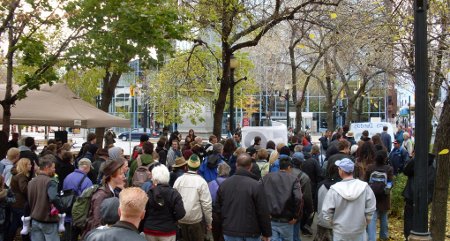 People begin the march to the Federal building

When the rally reached the Federal building, a group of young activists led a cheer of "3-5-0! 3-5-0!", whom Hamilton and District Labour Council Don Fraser later celebrated as the next generation of advocates to replace "us grey-haired guys". 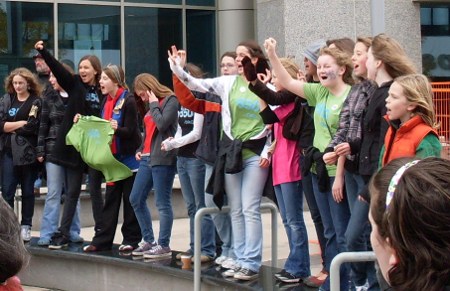 Also at 3:50, several churches on the Mountain collectively ran 350 church bells to commemorate the event.

I hope you enjoyed the jackhammers lol

"Most laymen, most citizens, owe most of what we think we know about global warming not to science directly, but to science as mediated by the media and by political bodies, especially the UN and our governments. We citizens, trying to discern what to do about global warming, must judge not only the credibility of the scientists but of those who claim to tell us what the scientists say." - "The Deniers(The world-renowned scientists who stood up against global warming hysteria, political persecution, and fraud)", by Lawrence Solomon, eminent environmentalist, author and activist.

While it is clear that climate science has a lot of political and media confounders mixed in with it, you really have to be both psychotic and self-centered, thinking you're a modern day Galileo to stand up and say things like 'global warming is not happening', 'humans are not causing this' and 'co2 has nothing to do with climate change'.

The evidence is all over the place, from freak weather events to melting glaciers and ice caps. In this part of north america we've been mostly spared, but ask even the most right wing Aussie whether this is real or not and they'll agree.

If you look at what some of Solomon's chosen scientists have said, it is hardly what he is insinuating, so I guess moderation doesn't sell books. e.g. interview with Freeman Dyson http://www.e360.yale.edu/content/feature... makes it clear Dyson doubts the accuracy of climate models owing to the uncaptured complexity of the real system (so do I) but also admits he doesn't know much about the whole thing (so maybe he should stock with theoretical physics?)

Given the complete lack of political traction that trying to decrease CO2 has had to date, there is something to be said about looking equally at the mitigating choices we can make. This might be more difficult than reducing CO2 in practice, but could get more acceptance because it is a challenge and not a (difficult) admission that our lifestyle is unforgivable.

'We're going to adapt to a changing climate' is a 'yes we can' statement that 'we're going to stop being such selfish pigs' is, however more honest, a downer.