The Art Gallery of Hamilton just announced that they will reinstall the gallery's iconic yet short-lived sign over King Street on Sunday, May 3, 2009. 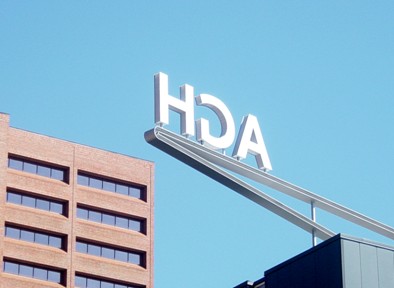 The AGH sign, seen from the corner of King and Bay before wind blew it down (RTH file photo)

The original sign lasted only eight months after the reopening of the gallery, which was renovated according to a design by Bruce Kuwabara. Then, on February 6, 2006, the sign blew down under high winds.

Weather permitting, the installation is scheduled to start at 7:00 AM and take six hours.

seriously, what took so long?

let's hope the engineers took into account the fact that we get thunderstorms and odd wind gusts around 100km in this part of the world.
I'm guessing they don't do much work in the southern US or tornado alley.

What does HDA stand for?

Perhaps we could ask RTH to take a picture of HDA from the east instead of the west so that it becomes AGH. lol Oh, wait, we'll have to delay that until the sign is re-installed.

are they using the same type of letters that light up at night??

well, the sign is back up and looking great.