The seemingly impossible is possible. We can have a good world.

In case you haven't already come across this:

Hans Rosling, a Swedish Doctor and International Health Professor, made a tremendously interesting presentation to the 2006 TED Talks conference on the relationship between public health and economic development:

It's data-rich but uses excellent visualizations to demonstrate that:

Rosling did a follow-up presentation at the 2007 TED Talks conference that went into more detail on the comparative rates of development of emerging economies vs. industrialized economies.

That is, the developing countries are actually developing more quickly in economy, public health and governance than the industrialized countries did.

For example, he undertakes a spirited defence of the progress of African countries, pointing out that their rates of development has been remarkable compared to the rates of growth of the industrialized countries to which they are compared. 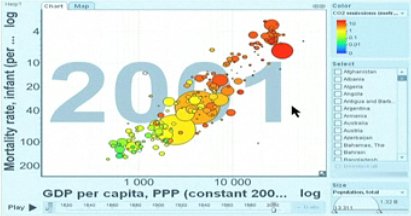 GHG Emissions per Capita by Country

One of the most remarkable aspects of Rosling's project has been to take formerly inaccessible UN data and create an open web-based interface that the public can now search:

This is just fascinating stuff!

The graph provided is GDP per capita versus infant mortality, which is misleading.
The rate of power consumption appears to correlate just as well as GHG emissions (if not better). What really needs to change is an unsustainable rate of consumption. If anyone plays around with the site, what's most concerning (for me) is the giant circles for India and China climbing along the consumption curves over time (throw up a GHG versus electrical consumption (both on log scales) and move the slider around on the year). The current level of consumption isn't working and it's not going to be any better if everyone wants to waste as much power as Canadians do.