A report headed to the Planning and Economic Development Committee next week gives a good overview of the various projects in the works in Downtown Hamilton.

It's also nice to hear the supportive tone of this report as it relates to the millions of dollars in renovations and new construction ongoing and planned in the Hess Village area.

This is one of Hamilton's gems and one of our busiest and most popular downtown tourist attractions. Let's hope to see more renovations and new construction in the empty buildings and empty lots to the east of the Village.

A proposed project that jumped out at me was a 15 storey Element Hotel by Westin at Main and Walnut (former site of the Modern India Buffet, which has moved to Main and Caroline).

If this project happens it will be a huge win for downtown. Bringing a top-notch facility by Westin into the core - an Element no less - would be outstanding. 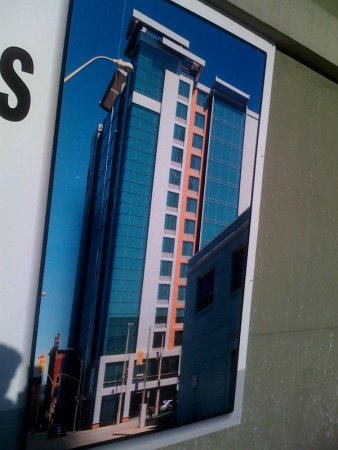 Poster for the proposed Element Hotel at Main and Walnut

The bottom line is that downtown continues to grow and turn the corner. One project won't make or break it, but several projects such as LRT, Education Square, new hotels, the Farmers Market / Library / York Blvd streetscaping plan and more waterfront development will all work together to bring a wave of change that will excite local residents and attract new business to our downtown core and surrounding neighbourhoods.

You can read the entire report [PDF link].

That hotel looks a lot like an office building. A few curves would be good and it'd provide some contrast to the older architecture around it, wouldn't it?

Nice to hear the announcement. Hope it actually results in construction.

Not that the current building is of historical significance, but I do remember it as a major blues, R&B venue back in the 60s & 70s. Saw The Rogues there on their South Ont. tour before they went to California to record, I think "Opportunity" and return as The Mandala.

Mandala was always my favourite example of the expression "world famous in Toronto" but could dance to them anyway.

Now if only we could get rid of all that damned surface parking.

I'd also like to see something done about the former Revenue Canada Building! I don't have much hope for it with the current owner.

While downtown-core development is great, what this city also needs to focus on is its 'neighbourhood' development. One of the best things about Toronto is its various and distinct neighbourhoods, each acting almost like a miniature village in itself. This is sort of happening on James North and Locke Street, but it needs to happen on other streets too.

Moseby, You're absolutely right. Hamilton was once like Toronto with vary distinct and vibrant neighbourhoods all through the lower city. Sadly, we sacrificed that for multi-lane highways and timed lights. You'll only see that sort of revitalization happen in areas where people (aka - shoppers, diners, cafe goers) feel comfortable. James North has been a great success, but sadly city staff are now looking at ways of speeding up traffic along James and John. I guess a few years of success is too much.

Locke, Westdale and Ottawa St should continue to evolve nicely in this manner. But most other neighbourhoods suffer drastically from high speed traffic from outside of the city and a horrendous pedestrian realm.

Do what I do and head to Toronto a couple times a year to enjoy Little Italy or the Junction etc.... and here's a secret I'll let you in on - Buffalo's Elmwood district and Allentown are unbelievable. Wonderful historic neighbourhoods downtown with vibrant street shopping, dining, public art and patios.

And of course, don't forget our very own Hess Village, Locke South, James North and what I personally have been labeling the next 'big thing' in Hamilton - John South through Corktown.

Sounds good, my thing is that I read this same report every year and new projects are announced but never seem to happen. Last year the report said building permits for over 200 dwelling units would be issued in 2008........didn't happen but there is no mention of this. The loan program, talks about how great it is that loans are being paid back, most of these are for condo's which as per the program are supposed to pay back as soon as the unit sells. It is obvious condo's are not selling (Caroline and Napier). Trinity landing was spun as such a great thing in previous reports now it is in receivership........wonder how much the city will lose on that one as it is a risky 2nd mortgage holder. 2003 ground floor vacancies were 9% now they are 10.1%

I think it is great that things are happening but it sickens me to read this report every year that is produced by the City. It is complete spin (except for the receivership issue). They never really acknowledge that some projects that they bosted about in previous years never happened. ie. Federal Building condos, the new hotel by City Hall which is presently used as an illegal surface parking lot. I've heard that the leader of the Downtown Renewal department is arrogant and self promoting. Hence the rosey self promoting report every year with very little acknowledgement of the real issues.

Concern, perhaps you have a valid point there, but if you check reports from last year you'll read about the cancellation of projects such as the Federal Building, Century Theatre and decision to hold off on the Hilton. News around city hall these days is that the HMP Hilton may actually start construction sooner than later. I'll believe it when I see it, but here's hoping. As for the director of Downtown Renewal, I've had the pleasure to meet him and some of the staff and they are great folks with a real passion for downtown. I've never sensed any arrogance from any of them. They acknowledge the problems and are facing them head on with all of the initiatives mentioned in the report and now purchasing downtown properties to redevelop them.
The ROI in the loan program is astounding. This department and associated programs are in my opinion the best operation in the city. The minimal amount of tax money loaned generates many times more in taxes and better yet, revitalized buildings and new construction. Sure, some projects may not succeed as well as others, but that's hardly the fault of this department.
I'm no architect, but I can tell you whats wrong with City View Terraces....horrendous design, lousy street presence and tiny units.
Contrast that with the CoreLofts which was a smashing success.

All in all, good things are happening downtown.

With respect to the annual report though, I think the good and the bad should presented. For example:

The loan program: loans have been given to condo developments, some of the loans for condo developments are outstanding. When a unit sells the loan is paid back in full at a higher rate then loaned. Should the report not explain why the condo's are not selling from a market standpoint rather then simply saying they are gradually being paid back.

Residential units: the 2007 report noted that it was a year of planning approvals and 2008 would see the issuance of building permits for 400 units (conservatively). There were only 17 units in 2008 and no explaination given the previous year's forecast.

Other projects were highlighted in the 2007 report, there is no mention of them in the 2008 report.

What about the municipal corruption police charges between city staff and a developer. Where is that in the process? Not that it should appear in the report due to legalities.

Construction activity: comparison of 2001 figures to 2008. Has inflation been factored in? You could get a lot more with 2001 dollars compared to 2008 dollars.

What is the business case to continue with the program ie. costs (wages, benefits, operating and capital costs) compared to revenues. I'm not saying the program should not continue but you can't simply look at one side of the equation.

A board of directors in the private sector would ask these pointed questions, I doubt that this City Council will. The professional thing to do from a staff perspective would be to provide a full analysis not simply look at one side of the coin. That is why this annual report is looked at as pure spin doctoring.

Maybe I missed it, but I don't see anything in this report about Stinson and the Hamilton Grand. I wonder why??

There hasn't been any news on the Hamilton Grand for some time now. Not sure what to think of that.