Spec: World to Get Better

Thank goodness for this.

Update: for some reason, the Spectator pulled this article, but here is a screen capture: 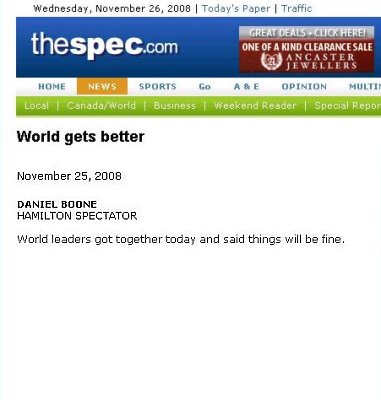 Screen capture of the Spectator article titled 'World gets better'

The title is "World gets better", and the article reads in full, "World leaders got together today and said things will be fine."

Eh? It's just the index of sections of the Spec?

Ha - I guess they removed that article!

did anyone happen to save the text of the article before it was yanked??

Thank God for that. I was beginning to get worried.

Guess I caught it in time to. Must be someone having some fun.

Haha...good piece. What's their big plan?? Throw around more money to all their rich friends? Lol.