For one day this summer HSR operators were asked to track the number of bikes carried on bike racks. On Thursday August 21, 109 riders loaded bikes on buses' racks. 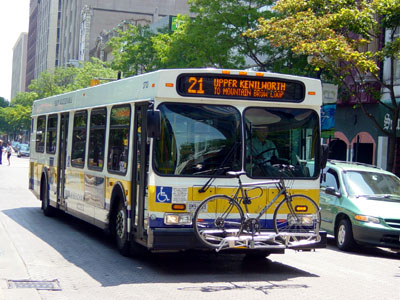 These staggering numbers far exceeded what the HSR expected and are unmatched by other municipalities offering bike racks on their transit systems.

According to the HSR, "the #22/23/24 Upper Ottawa, Upper Gage and Upper Sherman routes, the #1 King, #27 Upper James, #25/26 Upper Wentworth - Upper Wellington routes, #5 Delaware route and #2 Barton route seem to be the most popular routes for traveling with a bicycle."

Buses are carrying bikes in all parts of the city and many riders seem to be using them to get up and down the escarpment, once considered a formidable barrier to cycling.

The bike rack audit will be repeated in October with students now back in school. The numbers may be even higher than seen this sumer. As with last year, the HSR is planning on leaving the bike racks on all winter giving cyclists and transit users even more options to get out of their cars.

I've heard our town will adapt the concept of bike racks on buses. I hope they'll choose Yakima Double Down 4 over the other bike rack brands because I myself tried and proven Yakima bike racks to be safe and efficient.