Fringe Festival Review: I Am Not Neil Young

What does it mean to live in the shadow of greatness? How can a talent made famous for his ability to impersonate demonstrate or even discover his own true self? 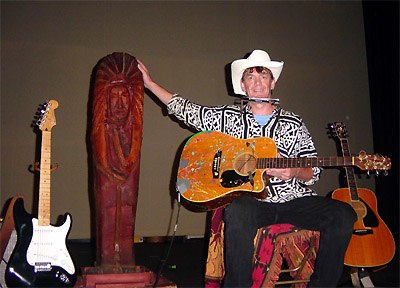 Frank Wilks is not Neil Young

Frank Wilks explores these and other questions in his one-man play, I Am Not Neil Young (directed by Don Lamoreaux).

Chronicling his rise as the star of Buffalo Springfield Revisited, his close brushes with celebrity, his descent into substance abuse and despair and his ultimate recovery, Wilks alternates between monologue and songs.

He traces out a creative arc that launches from the shoulders of giants and ends up carried in his own words and melodies.

This play could easily have sunk into banality or narcissism, but Wilks's charm and humility steer him clear of these pitfalls. What emerges is an archetypal tale of hubris, tragedy and redemption, made more poignant by its autobiographical nature.

Even if this were not true, I would recommend seeing it for the music alone. Wilks truly captures both Neil Young's world-weary falsetto and his pained, almost spastic riffing. His performance of "The Needle and the Damage Done" was truly haunting.

Really enjoyed this one too. I thought his own songs were a bit - it's like, when you're singing about something too personal it kind of feels like a diary entry rather than a song, but I did really like "Year After Year", the closer.