With all the attention on Lister and the Connaught these days, a seemingly smaller heritage item has surfaced downtown, involving the city's attempt to purchase two 1880s homes on Charlton West and demolish them so the land can be added to Durand Park.

While I can appreciate the desire in Durand for more park space, I think this is the absolutely wrong way to go about creating it. I have several suggestions and thoughts for the city and Durand Neighbourhood Association to consider on this issue:

First, of all, remember that once these homes are gone, they are gone forever. Home like this will never be built again. The DNA knows that. That's why they formed in the first place Â­ to fight the demolition craze in the '60s and '70s that brought us the plethora of towers in the neighbourhood today.

Second, the width of both properties is 32 feet. That's a measly 64 feet plus 140 feet in depth being added to Durand Park. Hardly enough room to get excited over, and certainly not enough to warrant the loss of these beautiful homes. 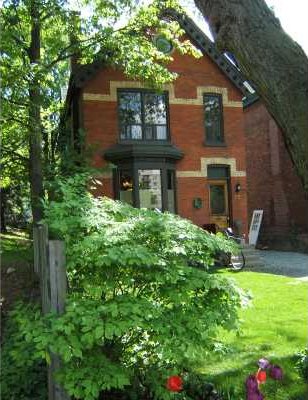 Recently the future of St Marks Church was up for debate at city hall. This building, despite its great past and historic status in Hamilton, has no future.

It's crumbling and just so happens to sit adjacent to another piece of greenspace in Durand, a much smaller piece of greenspace. I love history and historic buildings, so wouldn't it make sense to demolish the one that is already falling down (it's being propped up from behind by huge wooden poles right now) instead of two wonderful homes that have been lovingly restored?

Parts of the church structure could be designed to fit into the park with gardens, walkways and benches placed around it. It makes sense to me that the Durand Neighbourhood should be excited about adding a second park in the heart of their neighbourhood instead of tacking on a 64x140 piece of land to an already good-sized park.

We are finally seeing downtown neighbourhoods rebound after being hollowed out in the '80s. The value of these homes is a great indication of the demand for downtown living increasing.

Surrounding home values are positively affected by homes like this. Anyone who lives downtown knows that it only takes a couple of renovated homes on the block to get the momentum going.

A miniature addition to a park will not have that effect, and the demolition of these homes could actually have a negative affect on surrounding homes.

Destroying beautiful, urban, historic living spaces downtown cannot and will not ever have a good affect on surrounding areas. It is the restoration of homes like this that is drawing people back downtown.

In a perfect world every neighbourhood would have a park like Gage Park and properties like St Mark's would be revitalized and put to good use. In the real world, tough decisions must be made and made right the first time.

If these two homes are destroyed, there is a good likelihood that we'll still lose St Mark's someday. Why not save the two heritage properties that are in great shape and adding great value to Durand while adding a second park in a high-density neighbourhood that could use more than one park?

It may not be perfect, but it's the best of both worlds and adds more quality to this neighbourhood that has already lost far too much of its residential fabric.

Convert one of the homes to a park concession with outdoor patio in the backyard..

One of them has a sold sign on it today...

this letter was found on the Durand Neighbourhood Association website. Based on this, you'd think the last thing they'd want to do is demolish beautiful heritage homes...

On behalf of the Durand Neighbourhood Association (hereinafter “DNA”), the Applicant’s request to sever the land on the premises municipally known as 41 Inglewood Drive, in the City of Hamilton, should be denied.

The Durand neighbourhood is the inner-city district bound by Main Street West, James Street South, the Escarpment and Queen Street South. The DNA was established in 1972 as a politically independent community organization and chartered as a not-for-profit provincial corporation. It is the DNA’s vision to be an active, resident-based voice that successfully addresses priority issues affecting the neighbourhood to nurture a vibrant downtown community.

Inglewood Drive is the southern most street in the Durand and the southern border of the inner-city. It abuts the Escarpment with grand, old, elevated homes that dominate the streetscape. It is a jewel in the crown of our downtown. It is a special area for the residents who reside in Durand. This is a streetscape that the DNA wants to maintain, preserve and protect.

In addition, the DNA supports the objecting neighbours and petitioners regarding the proposed severance.

The proposed severance would create engineering, environmental, and historic problems that are irreconcilable with the DNA vision. The DNA is intent on preserving the heritage and character of its landscape, streetscape and natural scenery. The proposed severance would compromise the Escarpment lands which it abuts. Severance of this property, and ultimately its development, would severely compromise the environment and the neighbourhood to which it belongs. This would not be consistent with a smart plan for intensification of our urban neighbourhood.

Please notify the DNA with your decision concerning the proposed severance.

In the meantime, please do not hesitate to contact the undersigned should you have any questions or concerns.

We look forward to hearing from you.

Per: Janice Brown Board of Directors

good news. The city didn't get that house. They are done pursuing them.

"Crumbling?" Hey, the building inspector said that the walls and the foundation were great. The only thing that I have to do is replace the back porch, coz its suffering from rot. Not bad. I take occupancy on the 8th. Welcome me back to Hamilton!

Nevermind....its too early in the morning and ive been packing and working and...not reading the article properly, apparently...Yea, its a beautiful home and I'm just incredibly happy to be getting it.