The best land (called "dependable land"), defined in a new study by Statistics Canada (PDF, 165KB) as farmland not "affected by severe constraints for crop production (e.g., poor soil texture, inadequate drainage and adverse slope)", is being consumed by sprawl to the extent that it "may have implications for long-term agricultural sustainability" in Canada.

According to the study:

Production on marginal land may also be more environmentally harmful, as it is often susceptible to soil damage resulting in erosion, and requires greater inputs of fertilizers, pesticides and water to achieve a given yield. Between 1951 and 2001, the amount of cultivated land in Canada increased by 20 percent while the supply of available dependable agricultural land actually declined by 4 percent as a result of urbanization and other non-agricultural land uses (Figure 5). Sometime during the 1990s, the area under cultivation exceeded the supply of dependable agricultural land (Figure 5). [emphasis added] 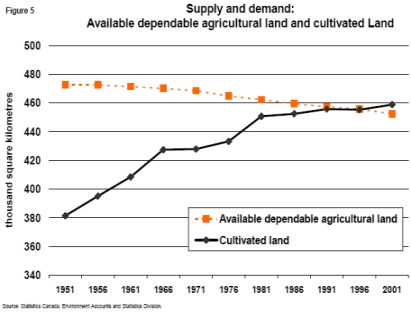 Explaining the sudden and massive increase in urban land-use around the mid-twentieth century, the study identifies the introduction of the automobile and "related infrastructure".

Before we transformed our cities to accomodate cars, "employment in urban areas was concentrated in the central core of towns and houses were located on small lots often within walking distance to work, shopping and other amenities."

Unfortunately, Ontario is home to more than half of the dependable land in Canada, nearly all of it in the sprawl-ridden Golden Horseshoe. The report notes that over eleven percent of Ontario's best farmland has been urbanized. "Once consumed," the report warns, "this land is, for all intents and purposes, permanently lost from agriculture."

Across the country, some 14,300 square kilometres of dependable farmland have been "permanently lost" to urban encroachment (23,200 square kilometres if you include rural housing, transporation infrastructure, golf clubs, campgrounds, etc.), a third of that in Ontario.

Destroying our best farmland to build more 3,000 square foot McMansions is madness. If it continues, and especially if one of the less optimistic climate change models comes to pass, Canada may face an agricultural depletion crisis in the future.

Looked at this way, urban revitalization, if undertaken in a sensible rather than faddish manner, may be a significant factor in Canada's ability to sustain its culture through the twenty-first century.