Classic rock at its finest: hard without being aggressive, beautiful without being pretty, and so bristling with hooks that you can't help but get stuck on it. 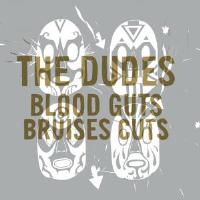 From the first licks of opening track "Honest Mistake", there's no mistaking The Dudes' Blood Guts Bruises Cuts for anything but full-on rock: big, bombastic stuff, redolent of the best bluesy arena rock of the 1970s. Think Big Star, not Led Zeppelin.

Then singer-songwriter Dan Vacon starts singing, and you realize you're in for something special. This is rock with feeling.

Vacon, whose idiosyncratic side-project Dojo Workhorse is also worth checking out, wears his heart way out on his sleeve, and he's expert at mining emotional substrata for sharp hooks, affecting lyrics and warm harmonies redolent with sweet "ooooooohs".

There's enough feeling and musical prowess - complete with well-placed time and tempo changes that carry the songs forward without falling prey to the pomposity of prog rock - to sustain a whole album, but even if this CD comprised 45 minutes of silence punctuated only by "Girl Police" and "Ghosts We're Buried On", it would still be worth it.

Jesse aint' dating.
She's down in the basement
Listening to Pet Sounds
Her mom's 45s get the best sound

"Ghosts" wades deep into blue-eyed soul territory, and I guarantee it will make you happy like nothing else you've heard this year.

"Pretty Lies" showcases the band at their most bombastic, recalling the strident mid-90s Canrock of Danko Jones and Matthew Sweet Band.

"Turning All Red" introduces a slight country flavour that nicely contrasts the soulful tracks that precede it. Following fast on its heels is the folksy "Small Mercies".

Later, the album slows down again in the indie-sounding "Had Enough of It", a sweet duet in which Vacon's soulful voice meshes nicely with fellow Calgarian Lisa Lobsinger of Reverie Sound Revue.

At 13 songs (plus a quirky bonus track), there's plenty to like across this collection. But while the individual songs are richly emotional, the album as a whole starts to feel a bit thematically one-dimensional. By the end I caught myself thinking, "Okay, you're a romantic, you suffer for love. We get it."

But that's a small gripe, and it reflects my own cynicism more than the band's romantic earnestness.

All in all, this is classic rock at its finest: hard without being aggressive, beautiful without being pretty, and so bristling with hooks that you can't help but get stuck on it.

The Dudes are playing at Club Absinthe, 233 King St. E., Hamilton ON on Friday, December 12.

You can sample their music at their MySpace page:

Always an intriguing and flattering comparison, but despite the Memphis/Stax connection, Big Star is closer to melancholy power pop than bluesy arena rock. As you say, small gripe. The myspace samples makes me curious enough to check these guys out.