These two economically and geographically similar cities have followed sharply divergent trajectories over the past thirty years.

I am lucky to live in a border region of Canada. Over a recent weekend I visited some old friends in Buffalo, NY. Driving to Buffalo takes about an hour from my home in Hamilton. Passports are now required for travel into the States. This prevents those without passports from making the crossing. This tends to discriminate more against Americans than it does Canadians, since the proportion of Americans without passports is higher.

Going into the USA from Canada is a more unsettling experience than the reverse journey (regardless of your nationality). The heightened American border paranoia discourages casual tourism between the countries and overall this policy of treating all visitors with heightened suspicion appears contrary to American interests. But they do let me in.

Buffalo has a reputation as an iconic rust-belt city whose fortunes have fallen on hard times. It tends to reinforce the Canadian attitude towards the States as a place where social and political problems somehow seem more intractable. 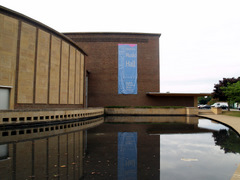 However, from an architectural perspective it might surprise some that Buffalo contains many jewels. The eras before and after the Gilded Age have been kind to Buffalo, at least for buildings you might find in architectural guide books.

Outstanding architects such as Wright, Richardson, Sullivan, Upjohn and Olmsted left their mark in way that cannot be matched on the Ontario side of the border, even in the larger cities such as Toronto.

Whatever appeal Canada might have does not appear to be caused by the quality of its architecture or urban planning.

Despite its wealth of architecture, Buffalo appears to suffer from the processes of post-industrialization much more severely than does Ontario. In Buffalo and nearby Lackawanna (the Buffalo equivalent of the East End of Hamilton), the mills pulled out quickly, leaving behind a wealth of industrial ruins, which are photogenic in that post-apocalyptic style I so admire.

As in its sister city of Pittsburgh, the steel producers decided very quickly that there was no point in pretending that steel production had a future there. In Ontario, they apparently didn't make such a decision and the steel factories continue to belch smoke and to provide employment.

The industrial districts of Hamilton continue to appear much like Lackawanna did thirty years ago. It is not at all clear why the two nations have had this different trajectory, despite being located in what seems to be similar geographical and market contexts.

Buffalo, even though it is the second largest city in New York state, is an outpost for the state on Lake Erie. It is separated from the main population centres in eastern New York state by the Appalachian mountain range. Buffalo faces the sometimes obscure northern country of Canada and depends on the Great Lakes for its water-bound transportation.

A major factor in Buffalo's history was the construction of the Erie Canal system, which connects the inland waterways of the Great Lakes to the Hudson River. When the canal first opened in 1825 it provided a direct link to the fast-growing regions of the West. This geographical advantage, which encouraged the early growth of Buffalo, has now disappeared.

Canada is a country for which proximity to the USA is a fundamental factor in development. The USA has a huge internal market. This means it's not too dependent on exposure to its northern neighbour.

Ontario is the centre of population density in Canada. Hamilton is near the geographic centre of the so-called 'Golden Horseshoe' area of Ontario, situated at the western end of Lake Ontario. It is part of one of the few regions in Canada that approaches the population density of the eastern seaboard of the USA.

Hamilton not only functions as an industrial centre (in probable decline), but also as a city which is in commutable distance to several dynamic, growing cities in the region, such as Toronto and Waterloo.

Hamilton is geographically at the centre of its own national context, whereas Buffalo is off to one side. Buffalo, like Pittsburgh and other rust belt cities, has suffered de-population due to the processes of de-industrialization. This appears to be a major factor in the overall morale of the city.

It is harder to feel good about your city if your friends and neighbours are continually 'voting with their feet.' Hamilton has not experienced such de-population and its morale seems correspondingly higher.

Hamilton has a predominantly white population and has, until fairly recently, been populated predominantly by those of European descent. This is now changing after the introduction of more equitable, colour-blind immigration policies in Canada in the 1960s and '70s. Hamilton now sees the growth of new communities by immigrants from Asia, Africa and the Middle East.

If immigration trends continue, Hamilton will follow the lead of Toronto and increasingly have a foreign-born population whose ancestral ties are not with Europe. This demographic change is welcomed from most quarters and adds to the attractiveness of the city for both investment and daily living.

In Buffalo, there is a similar population of Europeans who were attracted during the last century to jobs in industry, as can be found in Hamilton. An important aspect of American social history is the Great Migration of blacks from the southern states to work in northern industrial cities such as Buffalo. This internal migration, which has had such a dramatic effect on racial politics in the USA, has no equivalent in Canada.

This article was originally published on Michael Cumming's blog.

Nice article! It was also nice getting to know of your interests in urban development, writing and photography from your website.

Your observations of racial composition and the its impact on blighted neighborhoods is very valid, and Hamilton is extremely lucky to have avoided this and its resultant complex and irreversible complications - which have severely afflicted many cities in the US.
(ref: Urban Geography: A Global Perspective, Michael Pacione )

Having followed the growth of almost all the neighborhoods(*) in Hamilton over the last decade, I am inclined to say that -blight- is not the most accurate term to describe what ails Hamilton presently. If anything it is our aversion to celebrate our distributed, incremental regrowth that is most often the cause of our sickness.

Through the past decade, the momentum of the regional economy has managed to prevent true blight from forming in Hamilton.

The few neighborhoods skirting the industries on the north did and are going through some very tough times with the shift in the industrial base, leaving in its wake distraught neighborhoods. But as I have seen over the last five years, the strength and will of the communities in that part of the city has proved that not only does the survival skills needed in this time of transition - exists; but there is also an amazing amount of ingenuity and innovation flourising within these communities through which they are slowly but surely overcoming the conditions that could have led to -blight.

We should be proud that race issues has not been the driver of urban growth, decay or regeneration in Hamilton, as they have in countless cities across the continent. Although we do need to urgently tweak the public perception via your interest in photography - by documenting the resilience of our struggling neighborhoods that are fighting hard to regain their self-esteem and 'sense of place' and winning - amidst a political process that is often confusing and self-defeating on account of class issues.

I invite anyone interested in visiting these neighborhoods with me - to see and confirm first hand what I am stating here.

Looks like another spammer, disguising themselves as a poster. It especially galls me that the spammer is trying to promote an industry, of which the entire goal is to take advantage of other people's hardships.

Someone please delete the post, and ban the IP. I'd hate to see this site end up like the HammerBoard.

Ah, good to see that got taken care of. Thanks to whichever editor got rid of that post.

Hello Mahesh, Thanks for your comments. I would love to travel with you to any so-called blighted neighbourhoods in Hamilton. I think the attitude that certain parts of town are 'no-go' feeds into a culture of fear and alienation. People should be encouraged to see with their own eyes what is going on everywhere, including the Beasley, Lackawanna or the Hill District in Pittsburgh. In my experience such journeys are always worthwhile.

Michael, It would be a real pleasure to visit and share with you my experiences of the various neighborhood in Hamilton that are showing dramatic signs of recovery.

Maybe there are also others here who may be interested in joining us. Such group urban explorations would definitely help in dispelling the culture of fear and alienation, besides it would be a great opportunity to meetup with many here.

We can connect soon on this to set up a time.

Interesting article, however I take issue the point of Hamilton following "the lead of Toronto" in terms of immigration. Current immigration trends have been an absolute disaster for cities like Toronto.
The influx of economic refugees bringing little or no skills along with unwillingness to assimilate has contributed to rising crime and poverty. Being a native Hamiltonian, having lived in most neighborhoods of this city, and having the privilege of regular and extensive travel to Europe, I believe for a city like Hamilton to succeed, we need to look beyond ethnocentric immigration policies that have lead to the unraveling of once safe, sound and prosperous cities. To welcome the replacement of influence in a city whose very foundation is based on the work ethic and sense of community instilled by its European immigrant population is not a positive direction.