Why jump into a pool when you can plummet into it from a suspended overhead wire?

Fun loving, funny, and fun filled, I love my daughters, who are 12 and 10. Like most children, they're full of wants and requests, which, when reasonable, I try to accommodate. I figure if I'm nice to them, they'll change my diaper someday.

We got a fifteen-foot, aboveground pool recently. The pool required: tearing down 4/5 of an old; two-car garage, but keeping 1/5 as a shed; ripping up tons of asphalt and concrete; digging two trenches (electrical and gas); landscaping; and, of course, building (bamboo) fences and making a multi-level deck.

Relaxing in the warm, salt-water, recently, I thought I was done when Erin, the elder, asked, "Kevin, can we put a zip line over the pool?"

"You know, those things that you hold onto and zip down a wire, like at the park."

That was all the opening Erin needed. Suddenly, she was outside with a tape measurer and a ladder offering ideas and routes over the water. I laughed at first, but her enthusiasm and determination inspired me to help. We became a team: measuring, plotting, and planning.

We decided that if we got a 12-foot post and fixed it to the remaining part of the garage, we could run a wire over the pool and attach the other end to an eight-foot post on the deck, and they could scream right into the water.

"Can we make it today?" she asked, repeatedly.

Before long, I was out of the pool and driving to Ancaster's Home Depot to look for wire, wheels, winches, and whatever else might be needed to make a zip line.

We bought what I thought was necessary and returned home for the first attempt. I had purchased the thickest wire Home Depot carries and pulled it as tight as I could. I made a handle and fixed it to our pulley-wheel. The zip line looked good, but when Erin climbed the ladder and set off, the line sagged so badly she couldn't ride it.

Undeterred, I got the yellow pages (olde school) and looked up "wire." The only one I found in Hamilton was a company called Sling-Choker. I checked them out on the internets (Bush sckoole) and got their address on Rennie St.

I prefer face-to-face encounters, so I told Erin we were going for a drive. Armed with a quick, crude sketch of our hare-brained scheme , we set off.

Shy and sceptical, Erin asked, "Is this a store?"

"No, it's a place that makes industrial wire," I said, "but, maybe they can help."

"Who cares? Perhaps, if we're really lucky, we'll meet a nice, helpful person and they'll say, 'Come back tomorrow and we'll have everything you need.' And it'll cost $80."

We arrived at the big, industrial building. I don't remember a sign, just seeing the number. We went in the front door and were greeted by a smiling, friendly employee named April.

I took out my sketch and said, "I may be barking up the wrong tree here, but we're trying to make a zip line over our pool."

"Awesome," April said. (We weren't crazy!) She asked Erin, "Is this for you?" Then she explained that she played on one as a kid, as well.

We discussed our needs before April excused herself and set off for the plant.

"Erin," I said, "I got a great feeling about this lady. I'll bet she comes back with everything we need."

Sure enough, April returned with dirty hands, fasteners, and - most critical - the wire-tightener and explained how to use everything. Shortly after, a young man emerged with a 25-foot of piece of quarter-inch industrial cable. The bill was less than I had dreamed. We thanked April profusely and were on our way.

As glad as I was to get the right equipment, I was pleased Erin was there to see April in action. It's refreshing to encounter someone who's helpful, competent, and knowledgeable. It was probably the smallest order Sling-Choker has ever had, but it was, in its own way, very valuable. (They're at: http://www.slingchoker.com/.)

I set the line up again and began tightening it. This time, however, the tops of the posts began to pull inward before sufficient slack was removed from the wire.

We had a cousin in the hospital, so I had to take a break from the undertaking. While pedalling to St Joes' and ruminating the latest conundrum, I ran into Ryan McGreal, editor at large. I explained the project and the hick-up with our pinching posts.

Using one arm as a post and the other as a cable, Ryan demonstrated the simple solution that guy-wires provide.

The next morning, I was back at Home Depot for more fasteners, nuts, bolts, and clips. We attached the guy-wires, then synched the zip line taut. When Erin's next inaugural ride was successful, I fist-pumped like Tiger at The Masters. 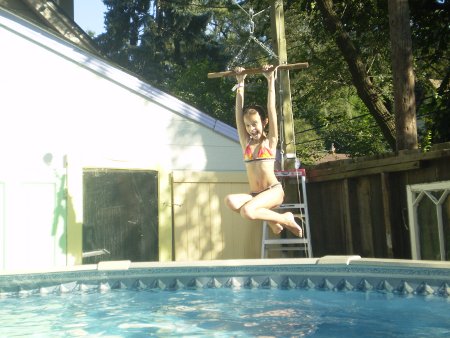 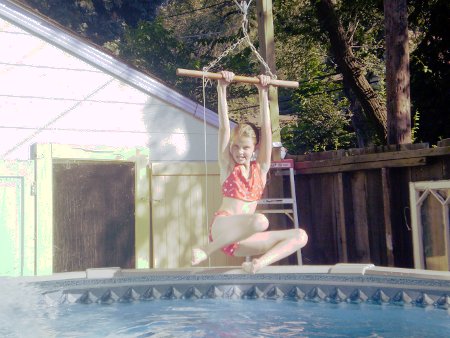 Erin loves it when a plan comes together

The following day, there were six girls, from ages 12 to three, who played in the pool for hours and took turns riding the zip line, again and, "Again!"

Sling Choker is a great place! And they do have a sign... 2 I believe. Glad your zip line worked out.

Does Ryan know everything...?

PS I hope you have insurance :)