The dynamic tension between the band's space rock tendencies and the tight song structures that bound those tendencies makes for a taught, energetic listen. 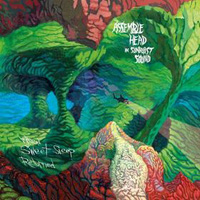 Assemble Head in Sunburst Sound (AHISS) makes melodic indie rock with menacing riffs, bluesy licks and driving rhythms. They're from San Francisco, and their music seems to have soaked up the West Coast's long romance with psychedelic garage rock. You can trace a straight line from their music right back through The Charlatans - and that's just fine with me.

On their new recording, the eight-song EP When Sweet Sleep Returned, AHISS manages to avoid the worst excesses of the psychedelia they explore through a firm commitment to discrete song arcs. The dynamic tension between their space rock tendencies and the tight song structures that bound those tendencies makes for a taut, energetic listen.

The music is hard enough to command your attention without overshooting into heavy metal. For example, the buildup and climax of "Two Birds" owes a debt to the similar buildup in the latter half of Pink Floyd's "Shine On You Crazy Diamond Pt. 3" with its almost frantic guitar solo.

The songs tend to the longish and trancelike, but they don't abuse the listener's patience with endless self-indulgent freeform jamming. Hey, sometimes a song just wants to be a song.

The vocals evoke both the dope-soaked harmonies of seminal psychedelic rockers Phish and the nasal Madchester tone of the Stone Roses, albeit buried under mountain of chorus and reverb. This is my only real complaint: at times the actual singing gets lost in the mix.

All in all, this is a very strong recording. There's no fat in the playlist or, indeed, within any individual songs.

(By the way, I find myself coming around to the idea that the six- to eight-song album is the 'natural' unit of musical output. It's about as many songs as can fit on a vinyl LP, and it seems to be about as many songs worth listening to as a typical band can crank out at a time.)

You can listen to a selection of songs on the band's MySpace page: